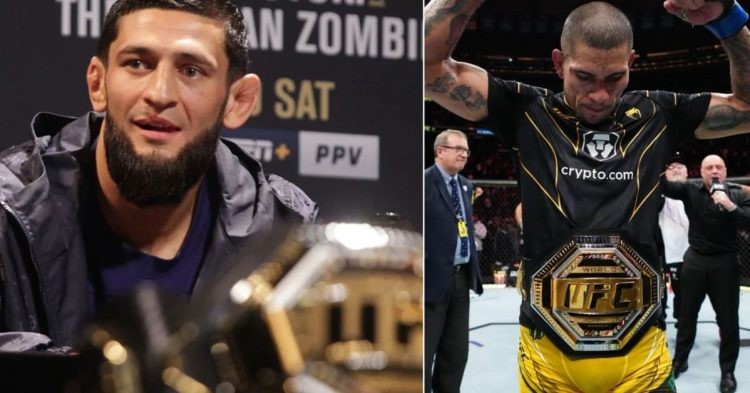 Khamzat Chimaev immediately took to Twitter after UFC 281 as he called out Alex Pereira following his emphatic stoppage win over Israel Adesanya which saw him become the new UFC Middleweight Champion of the world.

Bringing the belt back to Brazil! 🏆@AlexPereiraUFC exits the Octagon for the first time as a champion #UFC281 pic.twitter.com/s9g4zfScB3

Pereira handed Adesanya the first loss of his UFC Middleweight career as he stopped the Stylebender in the fifth round with a brutal left hook that wobbled Izzy, followed by a barrage of unanswered shots. Immediately after the fight, Chimaev called out Alex Pereira, requesting the UFC to give him a title shot.

In a series of tweets, Chimaev called Pereira “easy money” all the while proposing a fight at UFC 283 when the company heads over to Rio in Brazil.

Earlier, Khamzat Chimaev had picked Israel Adesanya to get the job done at UFC 281. Midway through the fight, Chimaev criticized the main event for the lack of grappling and wrestling by both fighters.

Promising a finish in the first round, Khamzat Chimaev earned the attention of many fight fans after he called out Alex Pereira. As for the UFC 281 headliner, it was a slugfest to say nonetheless.

Earlier, there were reports that Khamzat Chimaev would move up to the Middleweight division after the horrible weight cut at UFC 279 that saw him miss weight for his UFC headliner against Nate Diaz. However, Chimaev would later confirm his stay in the UFC’s welterweight division. He is currently without a next fight scheduled.

Chimaev has only competed twice in the UFC’s Middleweight division. The Borz took on Gerald Meerschaert in his last middleweight bout. He won via KO in the very first round.

Will Chimaev get a shot at the title? That’s highly unlikely. It’s safe to say that a rematch will be in order after a spectacular finish to UFC 281. After all, Adesanya’s legacy in the UFC’s middleweight division might mean he will likely get an immediate title shot. Moreover, he was 3-1 on the judges’ scorecards heading into the fifth round.

The last minute of the very first round will continue to be the best moment of the fight barring the fifth-round finish. Adesanya rocked Pereira in the first round, and it’s safe to say, much like their second kickboxing fight, once again the bell saved Pereira, who would later stop Adesanya with the left hook.