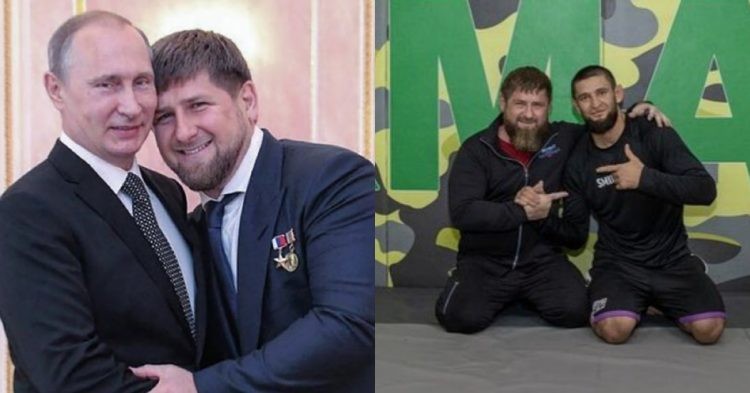 Khamzat Chimaev has found himself in some legal trouble recently. A report suggested recently that his passport was detained by the Russian authorities as he was on his way to visit his family in Chechnya. According to the report, Khamzat was not allowed to leave Russia as the country is currently at war with Ukraine and is recruiting soldiers for it.

So speculation ran rampant regarding the situation. Fans wondered what may be going on and if it will impact Khamzat’s UFC career or not. However, ESPN journalist Brett Okamoto later spoke to Chimaev’s manager Majdi Shammas and Shammas rubbished the claims and said there are obstacles with Chimaev leaving Russia. It definitely calmed the nerves of fans who were fearing the worst.

Amid all the controversy, Khamzat himself did not put out any statement regarding the situation. Interestingly, he was recently pictured with Chechnya Republic’s head Ramzan Kadyrov. Kadyrov is an extremely influential personality in the world of combat sports and is known to be a very close ally of Russian President Vladimir Putin.

Chimaev, who is originally from Chechnya, is also a very good friend of the Chechen dictator. One has to wonder whether the 28-year-old’s connection with Ramzan is keeping him safe in Russia or not. Chimaev is currently a citizen of Sweden and trains out of the All Stars Gym in Stockholm. Hence, not being able to leave Russia would have hampered his career in the UFC in a big way.

Khamzat Chimaev burst through the doors of the UFC in 2020. After beating Rhys McKee and John Phillips in the span of a week, Chimaev was put into a fight against Gerald Meerschaert. Although it was meant to be a hard test for him, The Borz just ran through him and knocked him out with one punch within 17 seconds. However, the real test for him was waiting just around the corner.

Later that year, Khamzat Chimaev was diagnosed with Covid-19. But despite being severely ill, he did not stop training a kept pushing through. However, it backfired as his body could not handle the rigid training sessions and Chimaev became seriously ill. He started coughing up blood and wanted to walk away from the sport.

However, it was the Chechen dictator Ramzan Kadyrov who stopped Khamzat from retiring from MMA for good. According to Ramzan, Chimaev’s retirement would have affected the youth in the country who looked upto him for inspiration and motivation.

“Khamzat said that his recovery from the illness has been slow, and, in an attempt to be honest and frank with the fans, he decided not to give them hope. I told him that all Chechens were upset by this news,”

“I reminded Chimaev that the youth, whom he inspires, are pinning their hopes and expectations on his success and if fans need to wait for his return, then we will all look forward to his return to the octagon with trepidation and patience,” said Ramzan Kadyrov. (h/t via The Mirror)

Khamzat Chimaev is coming off a dominant win over Kevin Holland at UFC 279. Although UFC President Dana White is not ruling out Chimaev staying at welterweight despite his weight miss, Khamzat himself wants to move upto 185lbs and a bout against Paulo Costa seems like an obvious fight to make.