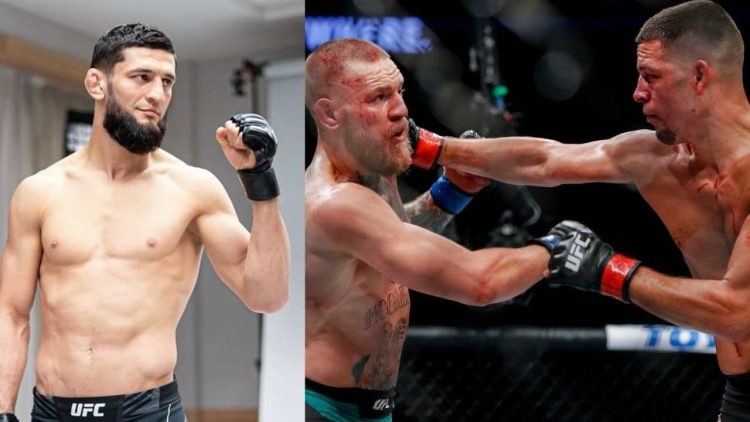 Khamzat Chimaev is all set for his upcoming fight against Nate Diaz. The fight marks Khamzat’s first-ever five-round main event fight in the UFC. The Swedish fighter will take on Diaz in the main event of UFC 279 at the T-Mobile Arena, Las Vegas, Nevada.

Although it is only Chimaev‘s sixth fight, he has shown why he is deserving of the main event fight with his ever-increasing hype and popularity. After demolishing the likes of Gerald Meerschaert and Li Jingliang, the fans were heavily in his favor. Although his bout with Gilbert Burns was close, it only solidified Khamzat’s reputation.

Speaking to ESPN about a potential McGregor vs Diaz trilogy, Chimaev had some interesting thoughts. “I watched the second fight, it was nice as well. I want to see one more fight with these guys. After my fight, maybe  Diaz and Conor get a fight.” Further, Chimaev reveals that he very much respects Conor and Nate for everything they’ve done for the sport.


When asked about who he would back for the trilogy Chimaev explains that he would be neutral. “Oh, I don’t know, I’ll just sit and watch with some chips you know,” he says. Chimaev also speaks about ‘handling Nate Diaz’s funeral for the UFC’. “It’s like one side, I respect the guy, all my opponents, I respect the guys. But once I wanna go to kill somebody, no need to respect somebody, you know?”

Heading into fight week, Khamzat is quite confident that he will beat Diaz. The Stockton Slugger is quite possibly at the end of his 14-year UFC and maybe even MMA career. Even the fans believe that Nate has been dealt a difficult hand in Chimaev for his last UFC fight.

What’s Next For Khamzat Chimaev?

Following an expected victory against Diaz, Khamzat will be gunning for the title. However, the situation might be a little more complicated as Leon Edwards is now the champion. As such, he will be defending his belt in an immediate rematch with Kamaru Usman before anything else.

This leaves Chimaev without a fight for some time. As we all know, Khamzat likes to fight frequently and will most certainly be on the lookout for a new opponent. Enter Paulo Costa, who has already drummed up the drama with Chimaev, referring to him as “Gourmet Chechen.”

With Costa also on the lookout for his next opponent, this could be the next fight to make. Remember, Khamzat can compete at both middleweight and welterweight, making the match-up a real possibility. Will the fight happen? Only time will tell.