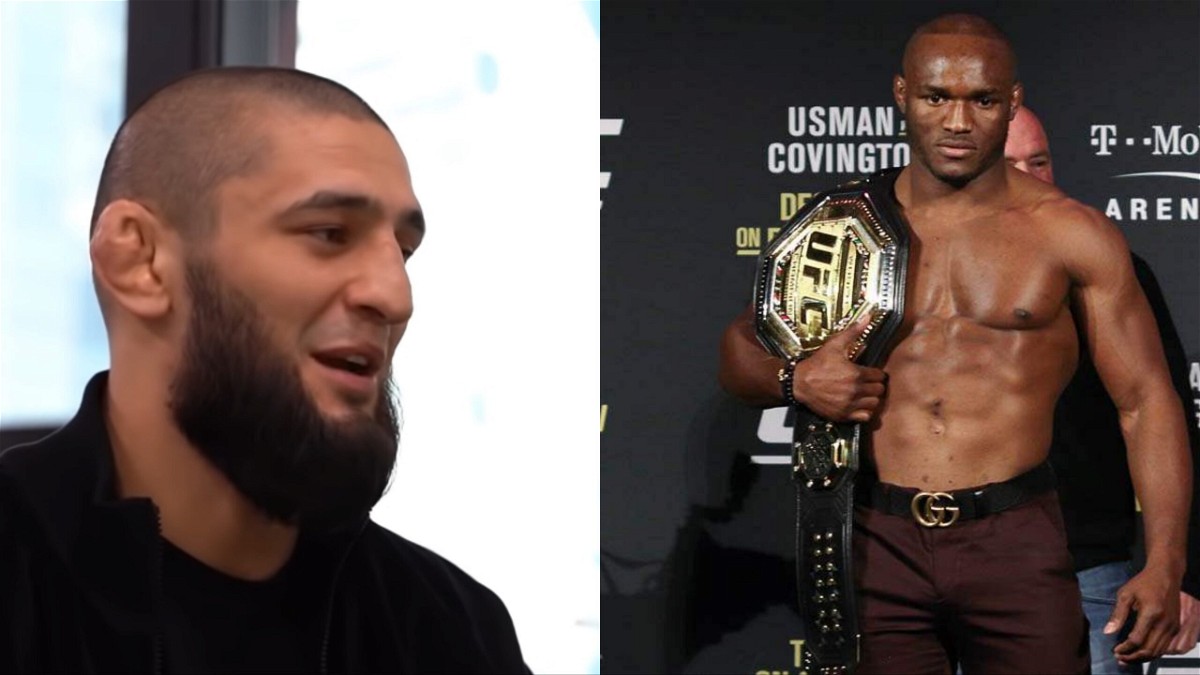 It is a secret to none that Khamzat Chimaev is in the best position to fight for the welterweight title. He will be taking on the no. 2 ranked UFC 170lbs fighter, Gilbert Burns, this Saturday at UFC 273. With a win this weekend, Chimaev is set to stand across the champion, Kamaru Usman.

However, the fight has been on Chimaev’s radar for a while now. At UFC 267, he choked out Li Jingliang in the most dominant manner possible. Following the event, Khamzat spoke on how a fight between the two would possibly go. He added,

“I just go in there and fight. I don’t have specific plans before bouts like ‘I’m just going to submit them or outwrestle them’. If I can, I wrestle. Sometimes I throw punches and people fall unconscious. So maybe I’ll submit him or maybe I’ll knock him out or maybe I’ll get knocked out. It could happen, this is the fight game. But I’m here to take my belt.”

Kamaru Usman responded to the call-outs made by Chimaev during an appearance on the Jim Rome show. He had nothing disparaging to say about the Swedish fighter. Usman said he will face Khamzat when the ‘Borz’ earns it. He added,

“He’s done great with the opposition he’s been presented and by the time he gets here, once he gets here, of course, we’ll have that conversation. But I am the champion, I am the pound for pound best in the world, I am the king of the castle. Everybody wants a piece of me. That’s good, I like that.”

During a recent interview with Daniel Cormier on DC’s YouTube channel, Khamzat Chimaev doubled down on his claims of Kamaru Usman being an easy opponent to face. The 27-year said,

“Usman almost handicapped, brother. His knees don’t work, his back hurts, his arm hurts, operation everywhere. The guy is too old and he’s too slow.”

Khamzat Chimaev is open to facing Israel Adesanya after UFC 273

Khamzat Chimaev is not limiting his championship opportunities to the welterweight division only. He has also been very open to facing the UFC middleweight champion Israel Adesanya. Previously, he called Adesanya ‘easy money because of the latter’s lack of wrestling pedigree.

During the conversation with DC, he spoke about the possibility of facing Adesanya in the near future. Although he does not think Israel is ‘scared to face him, Khamzat does not think Adesanya has the skills to match him.

Israel, I think he will fight me. I don’t think the guy’s scared. That guy’s gonna fight with me and I wanna fight the guy as well, but he’s not on my level.”

Although Khamzat is confident about his chances against the ‘Stylebender’, Izzy does not see a fight against Chimaev happening anytime soon. In the press conference after UFC 271, Adesanya responded to the future Chimaev fight by just shrugging his shoulder.