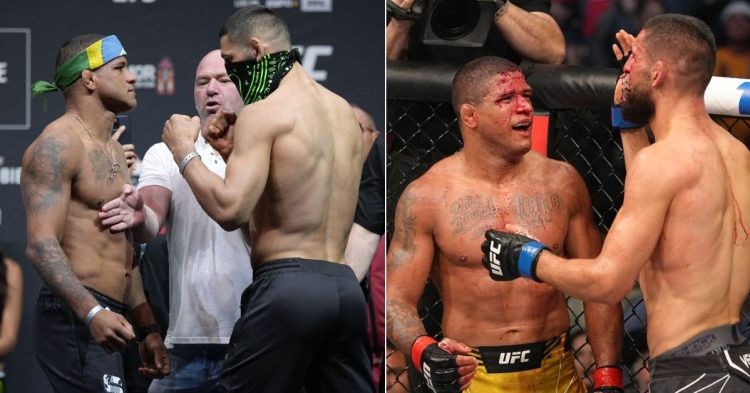 Khamzat Chimaev has responded to Gilbert Burns and has expressed an interest in competing in the UFC’s Middleweight division. Chimaev has been calling out Alex Pereira for a title fight in Brazil in January 2023, and it looks like he really wants to compete on the Brazil card.

“If Alex not ready to get killed, let’s du it again in Brazil 84 kg this time,” Chimaev said on Instagram, responding to Burns’ comments. Durinho later took to Twitter and confirmed he is ready to fight the Borz at “any weight”.

Burns and Chimaev shared the UFC Octagon back at UFC 273 in a three-round fight. In what was a performance of a lifetime from both the fighters, Burns and Chimaev put on an instant classic.

Gilbert Burns has not competed since UFC 273, having fought just once in 2022. Be that as it may, he has expressed his interest in fighting on the Brazil card when UFC goes to Rio for UFC 283. Burns has called out the likes of Jorge Masvidal, and Khamzat Chimaev among others, however, very little has been capitalized in terms of actually finding an opponent.

Khamzat Chimaev called out Alex Pereira for a super-fight for the UFC’s Middleweight title in Brazil. Chimaev has stated that he would fight Pereira in January, and then move down to the welterweight division to take on Colby Covington in March. However, it’s highly unlikely the UFC will agree to that proposal.

UFC President Dana White has already confirmed that the promotion is looking to book Chimaev vs Covington next. Meanwhile, Neil Magny has emerged as a possible next fight for Gilbert Burns. Magny called out Burns after his historic win over Daniel Rodriguez. Durinho seemingly accepted his callout.

Jorge Masvidal has also expressed his interest in fighting Burns albeit in London. None of these fighters have a fight booked, and it will be interesting to see what lies ahead for the welterweight stalwarts.