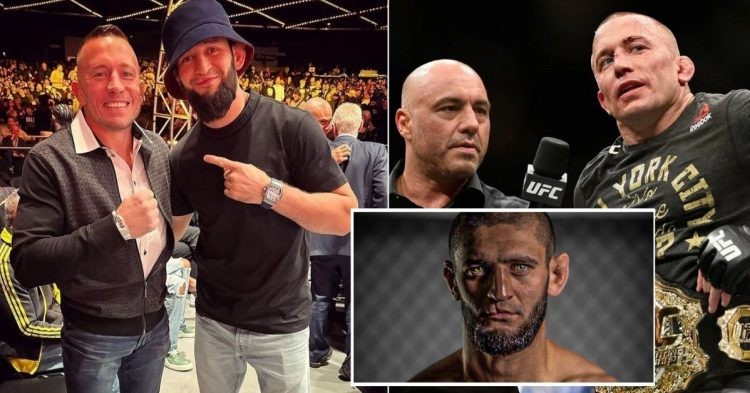 Despite such a short UFC career, Khamzat Chimaev has risen through the ranks and is already being compared to the likes of Khabib Nurmagomedov inside the UFC Octagon. Needless to say, the comparisons are courtesy of his wrestling prowess.

Another name that has now come up in comparison is Georges St-Pierre. For a very long time, fans have compared Khabib Nurmagomedov vs GSP, and now another fighter has jumped into the conversation. How would Khamzat Chimaev do if he fought Georges St-Pierre in his prime? Fans’ response is divided.

Khamzat Chimaev has truly established his position as one of the most dominant fighters in the UFC. Despite a competitive fight against Gilbert Burns, fans regard Chimaev very highly and some even believe that he would have beaten GSP.

Recently, the duo were spotted together during PFL World Championship. The photo of Chimaev and GSP has gone viral on social media and rightfully so. One of the greatest mixed martial artists of all time opposite someone who has shown all signs of greatness so far in his MMA career is truly exciting!

Khamzat gets mauled kids.Gsp took, held down and battered way more accomplished wrestlers that him.And they had at least decent striking.

As for who would win had these two faced each other inside the Octagon, many fans believe that the Chimaev would have had the upper hand considering how much mixed martial arts has evolved over the years.

Both great fighters I respect. My bet would be on GSP but I wouldn’t suprised if KC got the W.

Khamzat. Mma evolved, and gsp wrestling won’t decide in this one. And if Gsp arguably lost Hendriks, he definitely loses to Khamzat

GSP competed in a different era. Be that as it may, the dominance of wrestlers is still at large. While the leg-kick game wasn’t as dominant as it is now, it did not seem to bother Khabib Nurmagomedov during his UFC career, and even Islam Makhachev reigns at the top of the division as the UFC’s lightweight champion.

GSP was one of the best wrestlers in the game and his stand up was lethal. Khamzat is great but until I see him winning and defending titles to the degree that GSP did I’ll say GSP all the way.

GSP imo based on the amount of experience he had, one of the most well rounded fighters out there. But Khamzat is really dangerous tho with world class grappling skills and can stand and bang with top class fighters so if this fight really happen it would light up the arena

There’s a case to be made that both Chimaev and GSP’s wrestling cancel each other, leaving a striking battle much like Burns vs Chimaev. In that very aspect, St-Pierre might have the upper hand.

Is it a casual take to think khamzat has a good chance ?

However, one thing that would have been a huge factor is Khamzat Chimaev’s size. Borz is a huge welterweight and his size gives him a huge advantage over other opponents.

While it’s hard to compare who gets the upper hand in a game of inches, Chimaev could have had the upper hand solely because of his size. Be that as it may, GSP’s fight IQ and his experience inside the cage would have surely caused problems for Khamzat Chimaev.