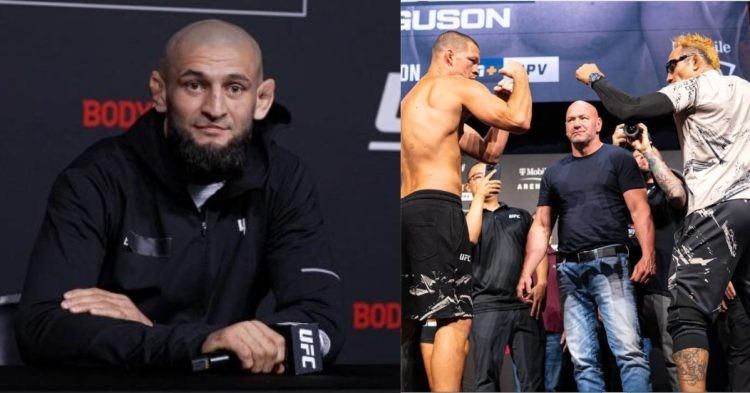 Khamzat Chimaev made some big revelations after a dominating performance against Kevin Holland at UFC 279. Chimaev who was originally scheduled to fight Nate Diaz in a five-round main event was pushed down the card to fight Holland in the co-main. While Chimaev did what many believe he would, absolutely dominated Holland from the very first second of the fight and got the choke locked in just two minutes into the very first round.

Khamzat Chimaev has labeled Nate Diaz a fake gangster after claiming the latter turned down a $2 million offer to fight him on Saturday. Reports suggest Chimaev was supposed to get around $1.72 million to fight Diaz. Chimaev says that he offered Diaz his whole fight purse but the Stockton Veteran denied the offer and went on to fight Tony Ferguson instead.

Talking to Megan Olivi he said “I could make that weight, the doctor stopped that,” So yeah, what I could do now? I was waiting what UFC said to me. I said I wanna fight so I gave all my money to that guy. This was almost two million.. So I said give all my money to that guy, let him fight. If he is that gangster, he should fight for money. But he didn’t wanna fight me, you know. So, who’s the gangster now?”

Chimaev vs Diaz: How would have it played out?

To be honest, seeing what Chimaev did to Holland it’s pretty hard to imagine Diaz posing any significant threat to him if they would have fought. Chimaev’s strength and power are unmatched, especially in the welterweight division.

The initial match-up was set to pit Diaz against Chimaev, however, ‘Borz’ missed weight by a significant margin to ruin any hope of us seeing that contest before Diaz left the UFC. During his post-fight media commitments, Khamzat revealed what he believes would’ve happened if he went one-on-one with the Stockton king.

Talking to the media Chimaev said he wasn’t impressed by Diaz’s work in the octagon.

“Did you see that fight? How they kick, how they punch, how they wrestle, how they grapple, do you see? The guys are old,” I’m a young guy. I’m the killer. I don’t understand what the people are talking about. This guy is from USA, this is his home. Guys like him. OK, make that f****** fight in my country. You will see. You will never find some guy who likes Diaz there. Nobody going to say Diaz’s name there. If they say it, they will kill them, so what now?”