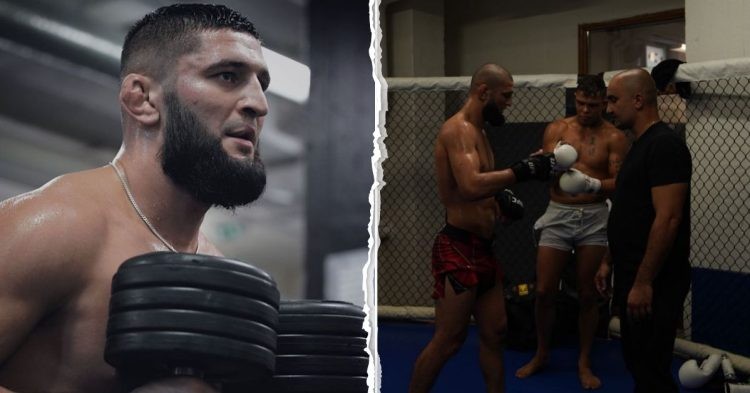 There are doubts about whether Khamzat Chimaev can sustain his run at the UFC’s Welterweight division after the horrible weight mishap back at UFC 279 that saw the promotion shuffle the entire fight card. Despite that UFC President Dana White has shown confidence in Chimaev and is even planning on putting Borz against Colby Covington in London next year.

UFC will move to London in early 2023 for the hugely anticipated trilogy between Leon Edwards and Kamaru Usman for the Welterweight gold. There’s a huge possibility we could see Khamzat Chimaev vs Colby Covington in the co-main event. Meanwhile, Jorge Masvidal has also expressed his interest in a fight in London.

In a recent conversation with ESPN, Khamzat Chimaev revealed his weight and it’s a whopping 198 lbs. Khamzat Chimaev weighs just shy of 200 lbs, and it’s no wonder he is eying a super fight against Alex Pereira in January.

“I am 90 kilos right now. I don’t know how much is pounds.” Chimaev said, quite confident he will make the weight come March when UFC plans to go to London for Edwards vs Usman 3.

Khamzat Chimaev says UFC wants him to continue at welterweight

On an interesting note, Chimaev also revealed he weighed more than 200 lbs in the lead-up to the Diaz fight. “I was more than right now before Diaz, but I get only six weeks, now I have four months. It will be easy to do 77 kg. I did that with Gilbert as well in two months, it wasn’t two months and I was the same weight. Four months is a lot of time.”

Borz further added that it is partly UFC’s decision for him to fight Colby Covington. When asked why he goes all the way down to 170 lbs despite the evident weight difference, here’s what he had to say. “Ask Dana, ask UFC, why they wanna do that. For me doesn’t matter. I am ready for everyone. They said, if I fight Colby, it’s good for me. Maybe for them as well.”

How does Khamzat Chimaev’s weight help him in his fights?

Khamzat Chimaev is incredibly strong as a welterweight. Chimaev’s ability to exert his sheer dominance inside the Octagon is partly due to the strength advantage owing to his weight. It’s safe to say he is not a natural welterweight.

At almost 200 lbs, Chimaev weighs as much as Alex Pereira on fight day. Poatan is also a huge middleweight and reportedly weighed around the same mark on the night of UFC 281 for his fight against Israel Adesanya. Needless to say, going in as a welterweight, it’s safe to say Chimaev weighs a lot more than 170 lbs on the day of the fight.

However, a case can be made that cutting too much weight can work against Chimaev. It’s fairly common to see fighters struggle with cardio and performance after a bad weight cut. The situation is quite similar to Khabib Nurmagomedov in the UFC’s lightweight division.

Be that as it may, with the help of the right nutritionist and the right way to cut weight, it hardy hampers the performance of the fighter and rather helps them gain a significant weight advantage over their opponents. Regardless, Chimaev missing weight the last time around raises eyebrows, and it will be interesting to see where his future lies as he continues his UFC journey.