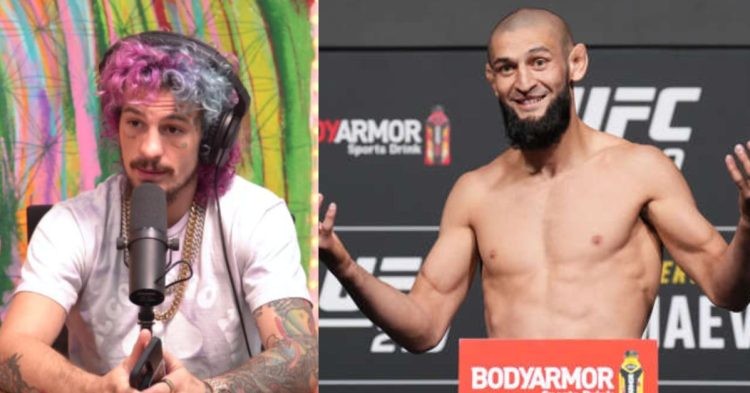 In the aftermath of UFC 279, many have questioned the ability of Khamzat Chimaev to make the weight cut in the welterweight division after ‘Borz’ missed the mark by around 7.5 lbs at UFC 279.

Sean O’Malley is among those who think that Chimaev should change his weight class. The Chechen failed to cut weight which lead to the reshuffling of three main card bouts.

Chimaev was booed during the event’s ceremonial weigh-in and after his dominating win over Kevin Holland in the co-main event. However, despite the weight-cutting fiasco and boos, Chimaev went out and rag-dolled Holland before choking him out. This was the fourth time when he won a fight without taking a single hit.

O’Malley appeared in a recent TimboSugarShow on YouTube and talked about many things. He also said that Khamzat is a problem for both the welterweight and middleweight classes.

Talking about Chimaev’s huge size and his missing weight for the main event bout, O’Malley thinks Chimaev should just move to the middleweight division.

Khamzat has fought in the middleweight division as well and shown his dominance in that class too. In such a short time, he has proved to be a threat in both divisions, and now fans are wondering if he should fight in 170 lbs or make his move up to middleweight.

Khamzat Chimaev Will Fight at Middleweight Next

Khamzat Chimaev was scheduled to take on Nate Diaz in the main event bout, but after missing weight by 7.5 pounds, Chimaev was slotted against Holland, while Diaz faced Tony Ferguson. Both Chimaev and Diaz won their respective bouts by submission.

When asked about the weight cut issue, Chimaev claimed that the doctors stopped him from cutting weight. However, O’Malley is doubtful of ‘Borz’s ability to cut down to 170 lbs.

The Chechen used the ‘towel trick’ and miraculously lost five pounds but was called out and forced to shed the extra pounds before weighing in again. Speaking on this, O’Malley said on the same TimboSugarShow:

“The first time, didn’t he do the towel thing? Like, missed weight but then did the towel, lost five pounds real quick, and then comes in and misses weight.

The thing is he said he could have made weight. Do we believe that or not? I’ve never had a doctor come in and say, ‘Hey, how’s the weight cut going?'”

But still, Khamzat is huge for a welterweight and due to the carnage he has displayed, any MMA analysts are wondering if Khamzat can make the weight cut for 170 lbs in the future.

Following the victory against Holland, Chimaev’s coach Andreas Michael stated that ‘Borz’ might be making a move up to 185 lbs for his next outing.  Recently, Michael also explained the whole weight cut incident and said that he decided to stop the cut, not the physicians.