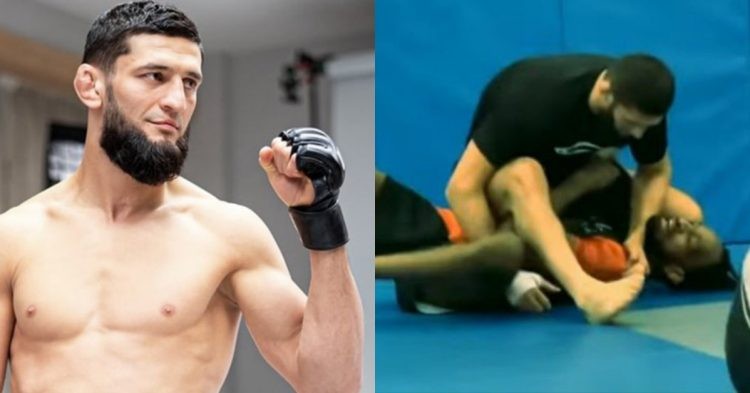 Khamzat Chimaev is perhaps the most fascinating character in the world of Mixed Martial Arts (MMA) at the moment. He created history in 2020 when he fought twice in 10 days!

Not only did he compete two times in two back-to-back events, but Chimaev also won the fights via stoppages. It looks like the Swedish fighter is only getting better and recently released training footage is giving the fans chills!

The Borz was training with fellow UFC welterweight fighter Neil Magny. Magny is famous for his long limbs and strong grappling. But, it did not look like he could use any of his skills against Chimaev. Khamzat just effortlessly rolled on top of Magny and caught the Haitian Sensation in a painful submission. Magny tried to fight it for a few seconds but then tapped immediately.

At the age of just 28, the room for development is vast for Khamzat. Growing up, wrestling was his primary skill set and he has done quite well in the amateur scenes.

Since coming to the UFC, Chimaev has gone head-to-head with a few BJJ black belts and has dominated them. In his last fight, he submitted Kevin Holland, which led to his coach claiming a lot of fighters earn their BJJ black belts undeservedly.

There are a lot of stories and training footage involving Khamzat Chimaev, which make him look like an absolute beast!

Perhaps the most famous story would be Chimaev and Alexander Gustafsson sparring at Allstars Gym in Sweden. Although Chimaev is a big welterweight and has fought successfully at middleweight, Gustafsson is a light heavyweight and heavyweight fighter.

But, Khamzat landed a big body kick that hurt Alexander Gustafsson and dropped him. It turned a lot of heads and built up an aura of invincibility.

His credibility only increased when Khamzat took on Jack Hermansson in a friendly amateur wrestling bout. Jack could not even sniff a takedown against Chimaev. So now, his effortless submission of Neil Magny does not surprise the fans in the slightest!

Neil Magny has 29 fights in the UFC and he has 20 wins. It is the most number of wins for a welterweight fighter in the UFC. He has even left behind Georges St-Pierre. So submitting him is no small feat.

That’s exactly how I imagined it would look.

Khamzat not even trying. pic.twitter.com/7aFUHyBgux

Khamzat absolutely having his way🤣

Khamzat is definitely skilled enough to be a black belt in Brazilian Jiu-Jitsu.

The slow strangle is the deadliest

The recent training footage suggests that Khamzat Chimaev perhaps has a fight lined up for him. Chimaev challenged the newly crowned middleweight champ Alex Pereira for a fight. However, UFC President Dana White wants to put him up against Colby Covington. So it does look like Khamzat will fight early in 2023.

Neil Magny, on the other hand, is in talks to fight Gilbert Burns at UFC 283 in Brazil on January 21st.