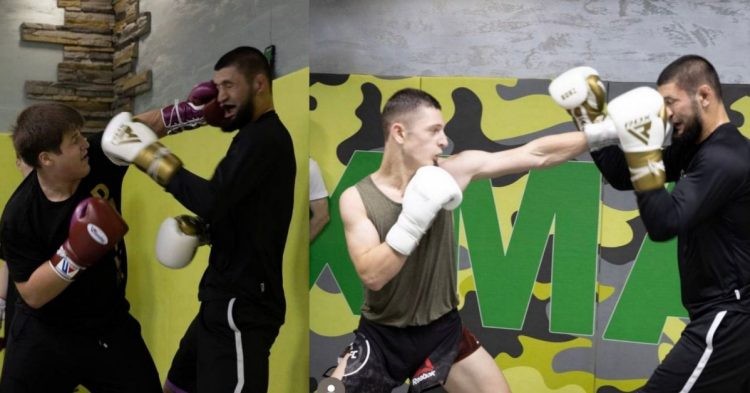 Khamzat Chimaev is currently rumoured to be stuck in Russia. Chimaev, who last fought Kevin Holland at UFC 279, was thought to be trapped in the country. Not only that, but reports also suggested that his passport was taken away as well. However, his manager has denied the legitimacy of the reports as he clarified that Khamzat is not trapped in Russia.

But right after Khamzat’s team rubbished the reports, he posted pictures of him hanging out with Ramzan Kadyrov. Kadyrov, coincidentally, is a very close ally of Russian President Vladimir Putin. Ramzan is also the head of the Republic of Chechnya. Although The Borz lives in Sweden currently, he is originally from Chechnya. Hence, Khamzat is extremely close to Ramzan.

When Chimaev was down with a very bad case of Covid-19, he was contemplating retirement. But Kadyrov was the one to pull him out of it. Why did he do so? As per the Dictator, Chimaev’s retirement would have been a huge loss for the Chechen youth. Khamzat is notoriously short-fused. But he could not deny Ramzan’s request and returned to fighting.

It just proves how influential Ramzan Kadyrov really is. In a few recently surfaced photos, Khamzat could be seen sparring with Kadyrov’s sons. The fans know how good Chimaev really is, so the sight of him being punched by two teenagers is something that is hard to digest for the fans.

Khamzat Chimaev has competed 6 times in the UFC. Barring his tough fight against Gilbert Burns, Chimaev has only been hit 1 time in his 5 fights. All of them are well-accomplished fighters and none could trouble the 28-year-old. Hence, seeing Khamzat getting pushed around by Ramzan Kadyrov’s teenage sons was an extremely awkward experience.

Underneath the post, fans speculated whether Chimaev did the sparring session willingly or not. While some think there was some monetary value involved, others feel sorry that Chimaev has to be in the situation.

Here are some relevant Twitter reactions on the matter

There’s literally not enough money in the world to make me do that.

Is there any way to confirm he’s being threatened/black-mailed into this? No. Does that mean we can dismiss it as a possibility? Fuck no. Khamzat is likely a victim here. He’s very prideful. I don’t see him doing this for some money. The whole situation just sucks.

Damn more punches landed than in his UFC fights

What are your thoughts on the matter? Do you think there is any validity to the report that Khamzat Chimaev is trapped in Russia? Or do you think he was just generous to give Kadyrov’s sons the chance to spar with him? Let us know your opinion on the matter in the comments section down below.