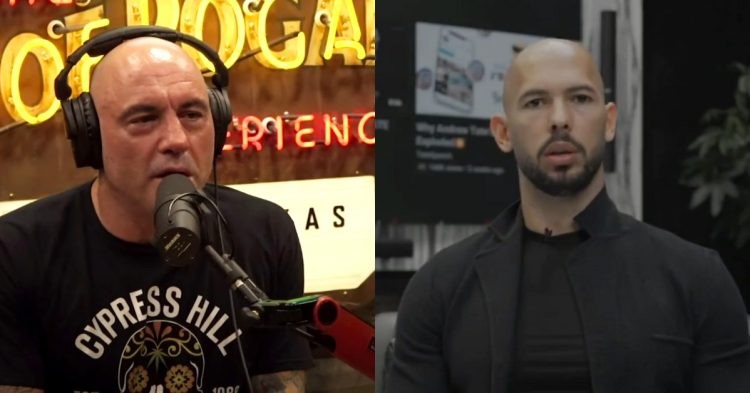 Andrew Tate is a former kickboxing world champion and an internet celebrity. After his fighting career, Tate transitioned into a role model for men. However, some misogynistic comments from Tate led to a hailstorm of controversies. Andrew was ultimately de-platformed and lost access to all of his major social media accounts. However, Joe Rogan does not approve of it.

Aside from his job as the UFC colour commentator, Joe Rogan has the most popular podcast in the world, “The Joe Rogan Experience.” Rogan is extremely opinionated and does not keep his thoughts private on matters which are subject to controversy. Hence, fans were extremely interested to know what his opinion is on the Andrew Tate issue.

During a recent episode of his JRE podcast, Rogan spoke on the topic of “toxic masculinity.” He used the analogy of the domestication of wolves to prove a point. Although he did not name Andrew Tate directly, he compared Tate’s situation to the current social circumstances.

“Like if you have seen a dog and wolf, it’s just thousands of years of breeding. My dog Marshall, have you ever met Marshall? Sweetest f***ing animal that’s ever existed. But he is an ancestor of a wolf. They have turned him into this thing, through thousands of years of breeding. Just like they’re trying to do to men. Exactly, that’s what they’re trying to do men. Yes, it’s through this toxic femininity sh*t or masculinity. It’s like ‘oh, you mean the men who carved the world, you just think you don’t need them. Because you don’t need them right now.” (h/t via Rogan Shorts)

Joe Rogan recently held a fight companion podcast along with other combat sports personalities like ex-UFC fighter Brendan Schaub and BJJ maestro Eddie Bravo. Among their many topics of discussion, Andrew Tate’s social media ban also came up. On it, Joe revealed his true feelings about why Tate suffered a ban from social media platforms.

According to Rogan, Tate has a lot of opinions that may help men in their life. Tate often preaches the importance of fitness in a man’s life. The 55-year-old stand-up comedian does not see anything wrong with that statement as it reflects his own personal views. So why did the former fighter, with a kickboxing record of 43-9, face the wrath of social media? Rogan thinks his misogynistic comments are the main reason.

“He was saying things about women that, he was saying that like, what did he say that specifically got them triggered? It was basically saying misogyny. Look, he plays part of it is like a character. And part of it he is a legit world champion kickboxer who is a hard man, who doesn’t buy any p***y b***s***. And that’s what’s resonating with young people. The worry is that he is going to, the kids are gonna listen to him ’cause he is big on Tik Tok. My 12-year-old and my 14-year-old asked me about Andrew Tate.”

Despite not having a big presence on major platforms, Tate’s popularity is through the roof at the moment. He recently protested and called the bans imposed on him, “unjust.” He denied all the accusations and blasted the media for exaggerating the issue. Even the UFC bantamweight champ Aljamain Sterling defended Andrew Tate and posted a photo with the controversial figure.

Bantamweight fighter Sean O’Malley also had Tate on his podcast recently. So it is evident that Tate is extremely popular amongst combat sports figures. Regardless of what his controversial stances are, Tate’s messages about fitness and building up a better personality is something that everybody can take on board.