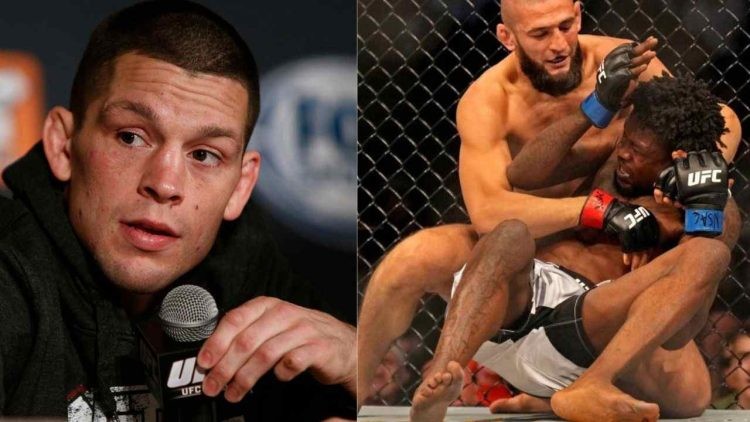 UFC 279 was one for the ages. For the first time in UFC history was an event surrounded by so much controversy. In the midst of all that, Nate Diaz made his ‘temporary’ exit from the UFC in style.

Coming into fight week Diaz was prepared to take on Khamzat Chimaev. However, due to Chimaev missing weight by 8lbs, Tony Ferguson took his place instead. After an emphatic victory over Tony by way of a guillotine choke, Nate had some interesting words for his original opponent.

According to Diaz, he was still in the process of cutting weight, when he was notified Khamzat might not make weight. Regardless, Nate did what he was supposed to do and cut down on whatever leftover weight he had. Following this, Nate entered conversations with the UFC to fight Tony Ferguson instead.

In totality, Nate felt pretty dismissive of and unimpressed by Chimaev’s antics this week. Not only did he fail to make weight for the fight, but he also got into altercations with Kevin Holland and Nate Diaz’s team. The altercation also led to the press conference getting canceled.

Following a dominant victory over Kevin Holland, Khamzat was clearly feeling good about himself. However, due to his unprofessional and callous attitude, Chimaev has also received a lot of flak. In fact, there were loud boos clearly audible as Khamzat got on the mic for his post-fight interview.

In the post-fight conference, however, Khamzat shared his thoughts on Diaz and their canceled fight. “You see Diaz fight. So terrible that guy is. How he keep that pride I don’t understand. Thinking about they can win against me. That guy Kevin Holland tough guy stronger guy. He’s much better than Diaz you know like if him and Diaz are fighting then Holland will kill him you know. Diaz has to thank God he didn’t have to fight me.”

Clearly, Khamzat believes that Diaz was lucky to escape and further demeaned the UFC legend. However, if Khamzat wishes to make a name for himself in the organization, he needs to get his act together. For now, Chimaev needs to shift all his attention into winning back the fans and the favor of the UFC.

“I Should Have Kept It Standing”- Tony Ferguson Regrets Listening to His Cornerman and Shooting a Takedown on Nate Diaz, Assures He Won’t Fire His Teammates