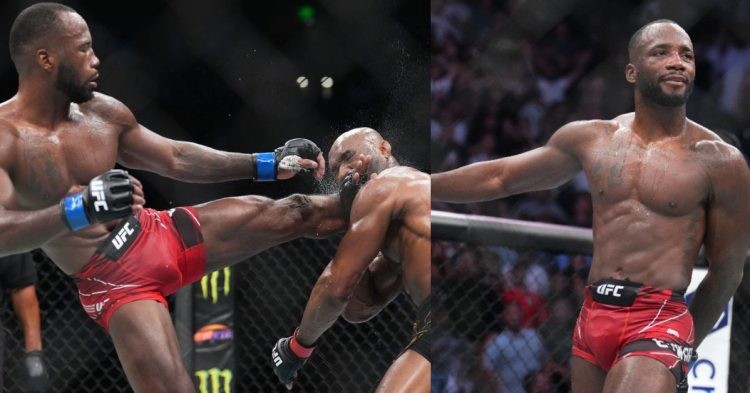 Leon Edwards wants the trilogy fight with Kamaru Usman to happen in U.K.

Leon Edwards is the new welterweight champion after dethroning the former welterweight kingpin and P4P No.1 Kamaru Usman. After upsetting Usman with a stunning head-kick knockout at UFC 278, Edwards shocked the MMA world and captured the title.

They are now expected to fight again to complete the trilogy. However, Edwards has made a statement that he won’t fight Usman again anywhere but in the U.K. In a recent interview, Edwards expressed that the trilogy must happen on his terms.

‘Rocky’ has had a tough path toward becoming the champion. Now after finally capturing the belt, he now wants the third installment of the fight to happen the fight in his home turf.

Edwards became Britain’s second UFC champion ever behind UFC legend Michael Bisping. He avenged his decision loss to his first outing with Usman. And after becoming the welterweight champion, Edwards now wants to defend the title on his home soil.

Dana White wants to make Leon Edwards vs. Kamaru Usman 3 in the U.K.

Apart from Leon Edwards, UFC president Dana White is also keen on the idea of making the trilogy bout in the biggest arena in London next. In the post-fight press conference of UFC 278, White stated that he wants their trilogy fight to take place at England’s biggest arena, Wembley Stadium.

Talking about the time of the third bout, Edwards said: “They said early next year, March-ish.”

“Early next year over here in the U.K. – the stadium show. I think they’re coming to Wembley because it’s probably cold in March,” Leon concluded.

As per sources, fight fans can expect the trilogy to take place in March. However, no official statement has been announced regarding the venue of the UFC so far. It might have to do with the cold weather at that time of the year that White has always dismissed the idea of hosting a pay-per-view event in the U.K.

Recently, there have been two huge UFC Fight Night events at the O2 Arena. However, the UFC has never hosted a stadium event in the U.K. before. Now that Edwards is the champion, White sees a perfect opportunity to make a huge PPV out of this bout.