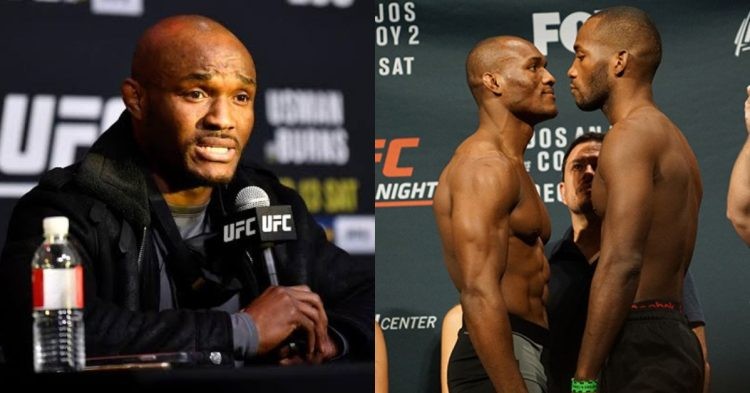 Kamaru Usman will defend his welterweight title this weekend on August 20 against Leon Edwards in a five-round main event clash that will take place at the UFC 278 PPV in Vivint Arena in Salt Lake City, Utah. Going into this matchup, both Usman and Edwards are in terrific form.

The Nigerian Nightmare is yet to be defeated in the UFC and has finished two of his last three opponents. It is needless to say that this will be an exciting matchup to watch for fight fans as Edwards has also earned this title shot owing to his nine-fight winning streak.

However, despite being on a great run, many contenders and experts have written off Rocky as they have predicted Usman to dominate this rematch just like how he did in their first fight.

Contrary to the opinion of fans and analysts, Usman identifies the danger that his opponent Leon Edwards possesses and subsequently, while having a conversation with ESPN journalist Brett Okamoto, the UFC welterweight champion reaped high praise on the British fighter.

From the interview, one thing is for sure Kamaru Usman is completely focused on Edwards and by no means is he underestimating his upcoming opponent because this is not the first time he has described Rocky as a tough opponent.

Kamaru Usman and Leon Edwards are all set to cross paths once again this weekend in the main event of UFC 278. Unlike their first fight, where tempers had flared up between the two welterweights in the build-up, this time around both Kamaru and Leon have mutual respect.

However, it seems like there are a few comments from Rocky that has stuck to Usman’s mind. Because The Nigerian Nightmare has revealed one of Leon’s antics during their first face off while speaking in an interview with ESPN MMA.

“But you’re saying certain things like I’ve said it before. When they are inside the octagon I’m the judge, the jury and the executioner and what he said those things boom stuck with me.”

It would be interesting to see how the fight plays out from here as both the welterweights are talking smack and are confident of getting the job done at UFC 278. Do let us know in the comments section who you think will win this title fight between Usman and Edwards at UFC 278.