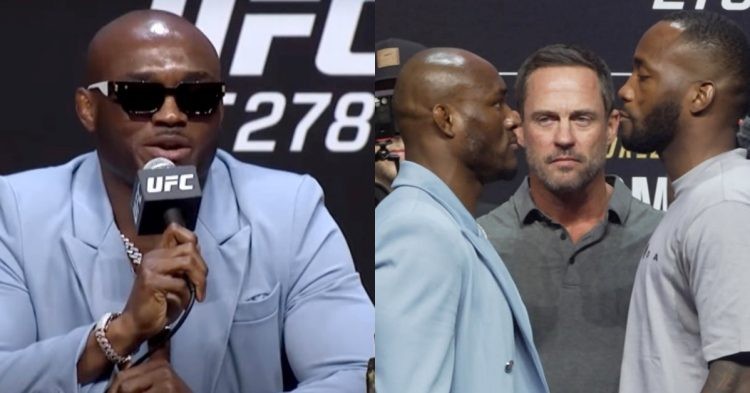 UFC 278 will see the welterweight champion Kamaru Usman having his 6th title defence since winning it in 2019. This time around, the challenger is an old foe, Leon Edwards, whom he beat in his second UFC fight. Leon will get the very first title shot of his career and the rematch will headline the Pay Per View (PPV) in Salt Lake City.

Their first fight in December of 2015 was an utter disaster for Leon. It was his 4th fight in the UFC and Edwards lost it via unanimous decision. The contest was not close by any means as Usman landed 126 total strikes as opposed to only 36 by the English MMA fighter. Usman also secured 6 takedowns and controlled Leon on the ground for 10:50 minutes of the fight.

However, almost 7 years have passed and both have achieved significant milestones in their career. Nicknamed Rocky, Leon has been unbeaten in the UFC since then and Usman has become the 170lbs champion. So their rematch is taking place at the perfect moment in their career. Both of them are in their absolute prime and it promises to be an excellent fight.

Fans are hyped about the fight and are wondering who may win on August 20th. In a recent video on his YouTube channel, the champ has weighed in on the rematch. Although Usman gave the proper credit to Edwards for his toughness, he still claims to have an advantage above the challenger.

“We saw it in the first Leon Edwards fight. Leon is very very tough. I’ve always said that. He’s very tough. But it’s just that slight edge mentally that I have and I think that’s what separates me from the rest of the pack.”

Usman’s comments on having a mental edge may seem like a throw-away comment. But it has to be taken seriously. Kamaru has gone under a tremendous transformation since the first Leon Edwards fight. After getting a hold of the title, Usman has lived up to his nickname and has truly become ‘The Nigerian Nightmare.’

After joining Trevor Wittman, Colby has focused much more on his striking. Before that, Usman used to rely solely on his wrestling to outmuscle his opponents. But now he has turned himself into one of the fiercest punchers in the welterweight division.

Fans recently saw Leon getting caught by Nate Diaz during their fight at UFC 263. If Edwards loses focus and something similar happens in the rematch, there is no doubt that Usman will put his lights out immediately. But Leon is the more technical striker out of the two. Although the 30-year-old may not possess the same power, he can certainly outscore Kamaru on the feet.

But that is where Usman becomes more dangerous. He is not a one-dimensional fighter. So he can switch from striking to grappling in the blink of an eye. Hence, he will definitely be the favourite to get the job done.

Who are you favouring in the rematch at UFC 278? Will Kamaru Usman maintain the dominance over the division with a win? Or can Leon Edwards find a way to dethrone the king? Let us know your pick in the comments section down below.