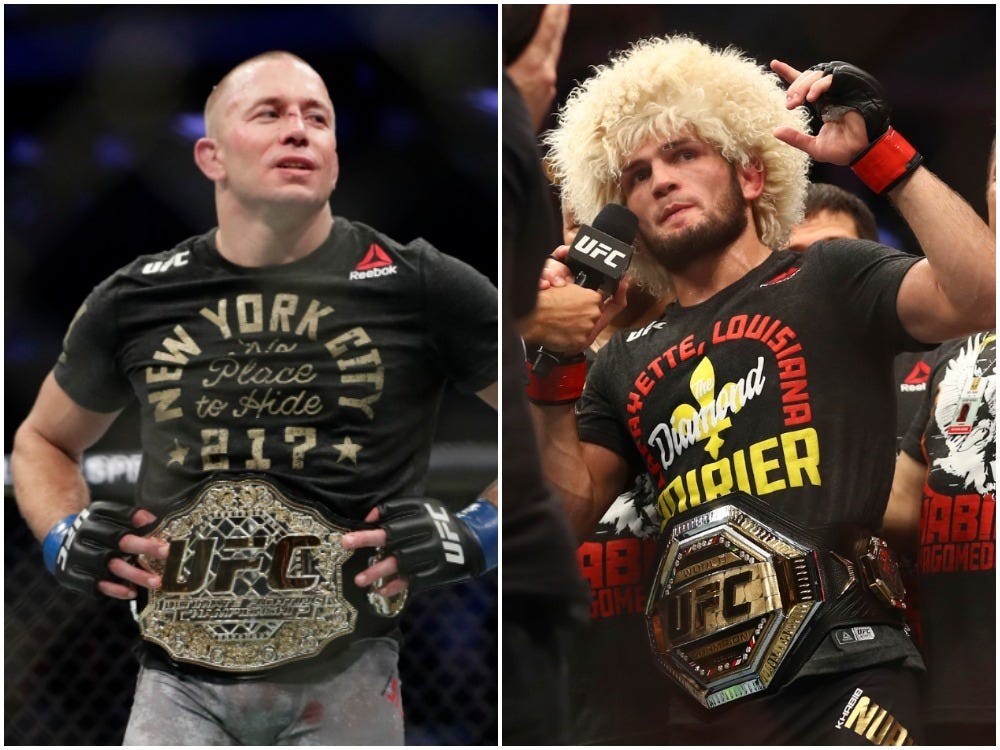 Every fight fan remembers George St-Pierre as a very genetically gifted athlete who also had the drive and motivation to train obsessively. Later the fighter became, perhaps, the greatest wrestler in MMA in any weight class at the time he was fighting. Now, there is this comparison always regarding him and the current welterweight champion Kamaru Usman. The debate for the better fighter between the two is always on the surface. Recently Khabib Nurmagomedov has given his views on the affair.

In recent times Kamaru Usman has made a definite stand to be named as one of the best fighters ever, and perhaps the world’s best pound-for-pound men’s mixed martial artist today.

Khabib thinks that if both were to fight now, The Nigerian Nightmare will be Victor. He says :

“Right now, I think it is [Kamaru] Usman [to likely win] because it is his primetime. What was the primetime of St-Pierre? I believe it was 2010-2009. I think it would have been tough for Usman to fight with him back then.”

GSP(26-2-0) retired from MMA on February 21st of 2019. Just within a month after his retirement, Kamaru (19-1-0) won the welterweight belt from Tryon Woodley at UFC 235. So, both the fighters had their own reigning period, and considering that Khabib said.

” I think St-Pierre was the best at that time. So, 2021 and 2010 are different times and different levels of competition. It’d be wrong to compare it.”

The Eagle further added that he believes it is hard to choose who’d win. Comparing to the case of Mike Tyson and Muhammad Ali he says that no one will ever know who will win. However, calling himself a GSP’s fan he said that it won’t be fair to offend a legend like him and then he finally chose one side.

“ Well, I’m a man who grew up during St-Pierre’s reign. I’m a huge fan of him. So, I’m leaning more towards St-Pierre. hope Usman won’t be offended…I think Usman himself also liked St-Pierre and I think Usman probably grew up watching his fights too. So let’s not offend the legend. I choose St-Pierre.”

Is Khabib Nurmagomedov right on choosing GSP over Kamaru?

Both  Kamaru and GSP are BJJ  fighters. Kamaru being a black bt might have an upper hand on GSP, who is a brown belt from Renzo Gracie. So, this would be a very technical wrestling match. Fight fans saw what Kamaru did to Woodley. But, If anyone can counter this it’s GSP. He could reverse the position, hit a foot sweep or trip, or fire back with his own punches. The winner would be the one who is more active in their grinding. However, we all know that it’s not going to happen so as Khabib said, respecting a legend should be the priority.