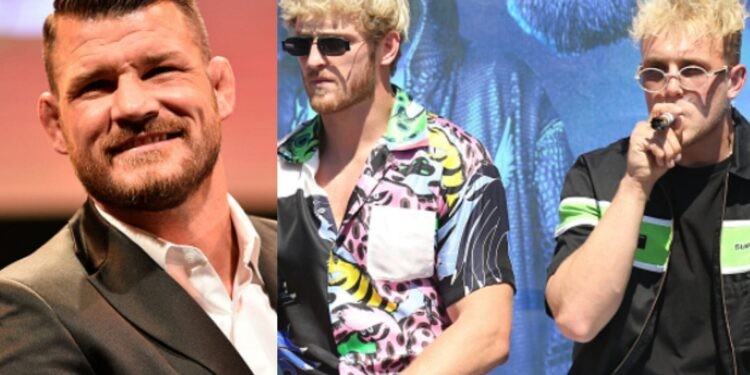 "Why are you such cowards?" Michael Bisping mocks Logan and Jake Paul's boxing careers

Logan Paul has been criticized by UFC legend Michael Bisping for calling out Paddy Pimblett. Despite having a huge size advantage over Pimblett, Paul challenged Paddy to a fight in the UFC. Michael Bisping then called the Paul brothers ‘cowards’ for their continuous call-outs of smaller or older opponents.

Logan ‘The Maverick’ Paul is a Youtube megastar and has competed in amateur, professional, and exhibition boxing matches. He holds a professional boxing record of 0-1 and is yet to secure a victory in the sport of boxing.

The biggest criticism of the Paul brothers’ boxing careers has been that they usually challenge MMA fighters from the lighter weight classes to face them in the boxing ring rather than coming into the octagon to play via their rules or face actual boxers their own size.

UFC legend Michael Bisping addressed this on his YouTube channel and stated:

“Why is Logan Paul such a coward, such a wimp, such a pu**y? Why is Jake Paul the same things? I’m not trying to be insulting, but it sounds like it because neither of these men wants to fight somebody their size, similar age, same goddamn sport!”

The UFC Hall of Famer noted that the Paul brothers should refrain from calling out MMA fighters from lower weight classes and start picking their sizes such as himself, Anderson Silva, and Anthony Smith.

Who will Logan Paul fight next?

Logan Paul has been in the ring against Floyd Mayweather but he has yet to win a boxing fight as a professional boxer and certainly has less pugilistic upside than his 5-0 brother Jake.

Paul also participated in the last Wrestlemania, which is pretty big for him, and has called out Paddy ‘The Baddy’ Pimblett recently, for which he has been slammed by Michael Bisping.

But it is still not clear who he will fight next. There were rumblings of a Mike Tyson vs. Logan Paul fight late last year. He might have moved on from that idea, even though Mike claimed to absolutely destroy any of the Paul brothers in a boxing bout.

Bisping labeled Paul as a “bully” for his call out of Pimblett and told him to fight someone his own size if he competes in the UFC. “The Count” feels the Paul brothers only take on smaller opponents and never call out someone of their size, like Anthony Smith.

Paul insists he is serious about competing in the UFC but only wants to fight someone who can “sell tickets”. That might be the biggest reason for his callout of UFC rising star Paddy Pimblett, who is the most hyped fighter after Conor McGregor.

The 27-year-old hasn’t competed since going the distance with Mayweather in an exhibition fight last year, with the event selling over one million pay-per-view buys. But it remains to be seen if he will make his MMA debut against Paddy or fight UFC legend Anderson Silva in a boxing bout.

Can Michael Chandler Be the First Fighter to Knockout Tony Ferguson?