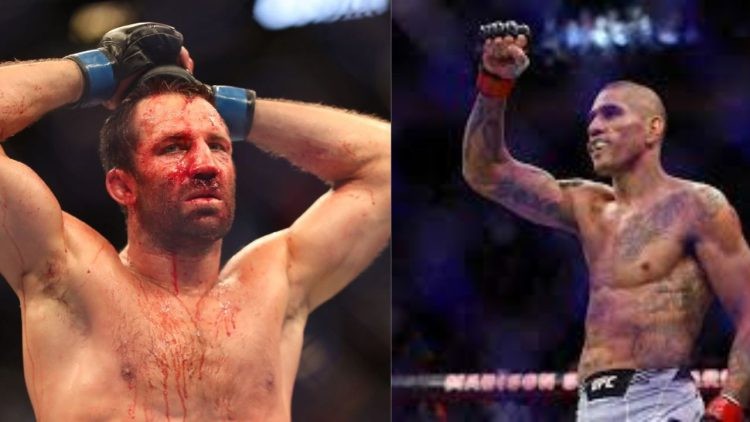 Former UFC Middleweight and Strikeforce champion Luke Rockhold made his departure from the sport at UFC 278. After three consecutive losses, many felt that it was the right decision.

However, it appears as though Rockhold is open to making a return if certain things unfold. Currently, Luke is recovering from a foot injury from his bout against Paulo Costa. As such, he believes that should the timings align, he could be making another run at the title.

Speaking to Submission Radio, Luke says, “If I get inspired, if someone inspires me to get back in it…you never know,” Rockhold revealed. “(Maybe) That Brazilian dude winning the title. Alex Pereira.” Further, Rockhold adds that a path to the title may not be so easy, especially with the likes of Robert Whittaker in the picture.

“The only thing is you gotta fight Robert Whittaker or some sh*t in between…To win or lose to Robert Whittaker, that sh*t hurts. It’s gonna hurt, we’re gonna fight,” he explained. Although he is aware of the difficult challenge, Rockhold still believes he can make a run for the title at 37.

According to Rockhold, Pereira’s weaknesses lie in his inexperience in the wrestling department. This is something that Luke feels that anyone can capitalize to ‘easily’ lay claim to the title. Even though it’s not completely straightforward, there is a world where such favorable circumstances for Rockhold happen.

Coming into his matchup with Paulo Costa, Rockhold was in the best shape he’s been in for a while. Even in the fight, Rockhold exceeded expectations and put in a very valiant effort. However, the decision lost really seemed to have broken his spirit at the time.

With age not on his side and a lot of recovery still left to go through, Luke should give un-retiring a second thought. As he said himself, he’ll likely have to take on Robert Whittaker as well on his way to the title, which could lead to an even more serious injury.

Would you like to see Rockhold return, in the UFC or somewhere else? Could he still replicate his title-winning success or is he washed up? Leave your thoughts in the comments below.