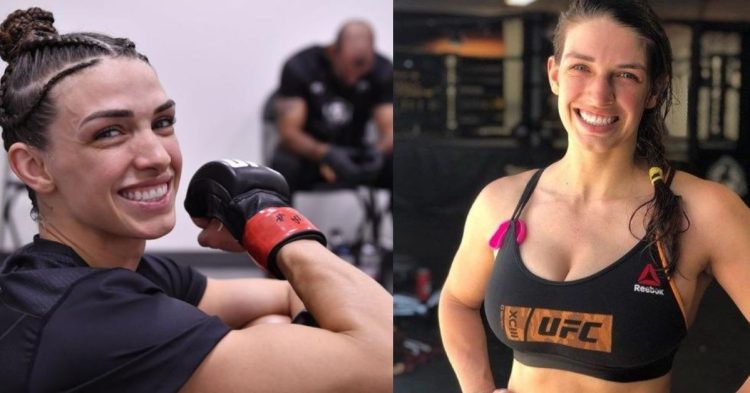 Mackenzie Dern has been the subject of interest in the world of MMA for quite a while. But the reason doesn’t contribute to her fights only, as she has received a staggering amount of attention for her accent.

Some people have claimed that she has a fake accent. This issue was also brought up by UFC color commentator Joe Rogan on his podcast. Rogan discussed one bizarre incident while speaking to martial artist Cat Zingano about Dern allegedly requesting a translator for her post-fight interview at UFC 224.

Rogan said that he was super confused as he couldn’t understand why they wanted a translator, as she is an American and speaks perfect English. Zingano wondered whether it was a ploy by Dern’s camp to market her as Brazilian, to capture the large and powerful demographic within UFC.

However, the truth is Dern is bilingual and is the daughter of a native Portuguese speaker, and was raised in a Brazilian household, before her father, Wellington Dias, moved to Arizona to pursue a career in BJJ.

Even though Dern was raised in Arizona, she is pretty fluent in both English and Portuguese. During her youth, she used to travel to Brazil with her father. So this might be the reason why Dern picked up the thick accent. Even now, she spends a lot of her time training in Brazilian camps.

As fans have accused her of faking her accent to draw attention, Mackenzie Dern has explained why she lost her accent. Apart from being raised in a Brazilian household, she also has a Brazilian husband who she says speaks Portuguese at home.

In the post-fight interview at UFC 224, the fighter said that she needed the translator because she was going to speak Portuguese for her “fans in Brazil” but then she ended up speaking English. The gradual change in her accent happened because of her prolonged exposure to the Portuguese language and Brazilian people.

Before her debut back in 2018, Dern addressed this while speaking to UFC reporter Ariel Helwani. She stated that she takes it as “a compliment” that many people are talking about her accent.

“It’s so flattering, you know? I think it’s just funny how they’re talking about it and I think after my UFC fights they’ll pay more attention to my fighting,” Dern told Helwani.

“But, they’re paying so much attention to this – it’s a compliment. I think people are starting to understand this is me, it’s who I am. I think it will pass in a while,” She added.

Despite the accusations thrown at her, she is indeed one of the most talked about fighters in the UFC right now. Mackenzie will have a chance to show off her accent and elite grappling skills when she takes on Yan Xiaonan at UFC Vegas 61.