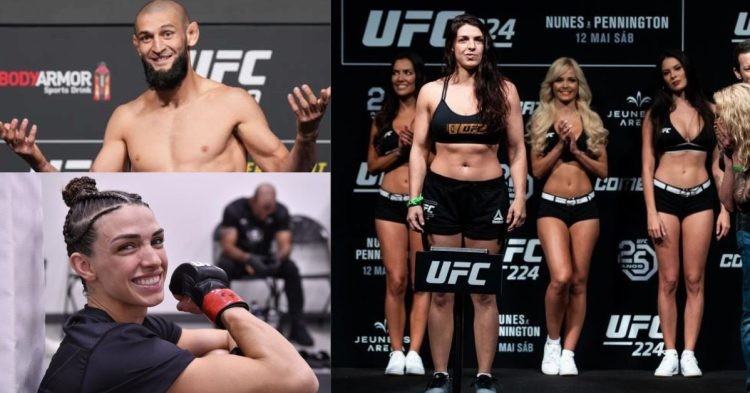 Former multi-time BJJ champion Mackenzie Dern claims that her issues with weight cuts are a thing of the past now. Since joining the UFC in 2018, Dern has become one of the fastest-rising prospects in women’s MMA.

However, Mackenzie had some issues with making weight before but the recent weight fiasco with Khamzat Chimaev during UFC 279 overlooked Dern’s weight issues. Khamzat missed weight by almost 8 lbs, which is a huge mark, and that led to the main card reshuffle.

In a recent interview, while explaining her previous weight cut struggles, Dern jokingly said that perhaps the headlines caused by Khamzat will take the attention of the public from her.

“But hey, I mean, I just after seeing Chimaev not make the weight more than mine I was kind of like, okay, that beat my record,” Dern said.

“I’m hoping that people will talk about that and just forget about mine,” Mackenzie added.

When Dern first made her transition to professional MMA, she missed weight three times. However, she explains the steps she took to assure that never happens again. In the interview, Mackenzie said that she is comfortable in her division.

Mackenzie is set to headline the main event of UFC Vegas 61 against Yan in a strawweight bout. Hopefully, she won’t have any problem with making weight as explained by her. The winner of this fight will certainly have a big opportunity.

Mackenzie Dern and the possibility of her being a title contender

Mackenzie Dern is currently ranked No.5 in the women’s strawweight and with a win over Yan Xiaonan, who is sitting at the No.6 spot, she could very well land herself a possible title shot.

Nonetheless, Dern has promised her fans that the weight cut won’t be a problem now as she is now comfortable where she is at. She also made weight successfully at 115 pounds seven times in a row.

While explaining her strategy to make weight and be physically healthy she said:

“It’s just my goal is just, like right now I’m just working on getting muscle mass. So I’ve been with my strength training coach Rogerio Camoes for two years now. So it’s just it’s a long process, you know, just putting on muscle, putting on muscle.

Dern is coming off an impressive win in her last outing against Tecia Torres. With her slick submission skills, she is proving to be a threat in the women’s strawweight division right now. Mackenzie also expressed her intentions to move up a weight class in the future.