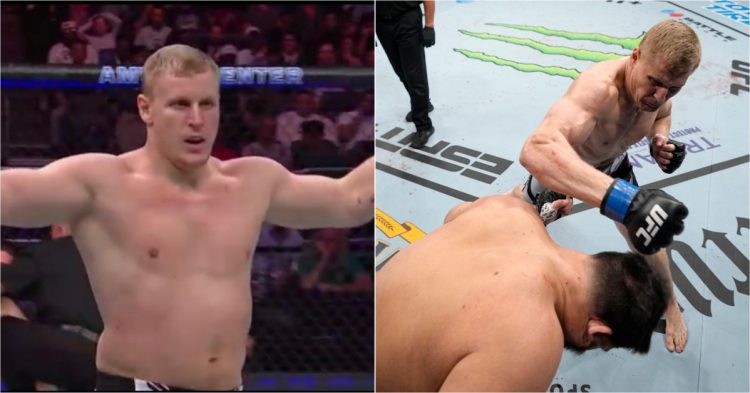 Tai Tuivasa vs Sergei Pavlovich was one of the most-anticipated fights on a stacked UFC Orlando card. Both heavyweight fighters gained notoriety for being knockout artists and were not shy about throwing caution to the wind to secure a stoppage. Neither fighter put too much stock in wrestling, so the fans hoped to see a striking battle. So how did it go? Let’s find out!

Well, fans did not have to wait for too long to find out the winner. Sergei Pavlovich came out swinging from the very first second. So how did Tai Tuivasa respond? The Aussie knows only one form of defense and it is to attack. So the 29-year-old also started to swing for the fences as well. Despite all the haymakers, it was a jab from Sergei, that sat Tuivasa down.

The jab landed about 10 seconds into the bout and it compromised Tai’s equilibrium. But, Tuivasa was still trying to land a big punch as his defense mechanism. But Pavlovich stayed just outside the range and put together a combination of punches that forced the ref to stop the bout only 54 seconds into the contest.

Sergei Pavlovich improves his MMA record to 17-1. His only loss was against Alistair Overeem on his UFC debut in 2018. The Russian fighter has put together a winning streak of 5 fights since then and has knocked out all of his opponents in the process. His KO win over Derrick Lewis put him on the radar of a broader audience. But, this KO win against Tai Tuivasa will certainly add a lot more credibility to his resume.

Make that FIVE straight finishes, and an undefeated record in the UFC for Sergei Pavlovich!! #UFCOrlando pic.twitter.com/oaV2ARy6E1

Tai himself has the power to knock out any heavyweight in the division. Hence, seeing the 30-year-old handle Tuivasa the way he did, is giving fans goosebumps. Even former UFC welterweight title contender Gilbert Burns could not help but share his amazement about the result!

The UFC community reacts to Pavlovich knocking out Tuivasa

Sergei Pavlovich TKOs Tai Tuivasa in the first round.

Sergei Pavlovic Vs Nganou is the fight to make.
UFC should pay Francis whatever he wants. Pavlovic has been winning without getting touched. Nobody really knows the condition of his chin or gas tank

Former UFC double champ Daniel Cormier asked Sergei about his plans for his next fight. But, Pavlovich does not plan on fighting anytime soon. Instead, he wants to take some time off and see how the division plays out.

The UFC heavyweight title holder Francis Ngannou is rumored to be fighting Jon Jones at UFC 285. If Ngannou does manage to retain the belt, the bout between The Predator and Sergei Pavlovich is going to be a tremendous fight to witness.