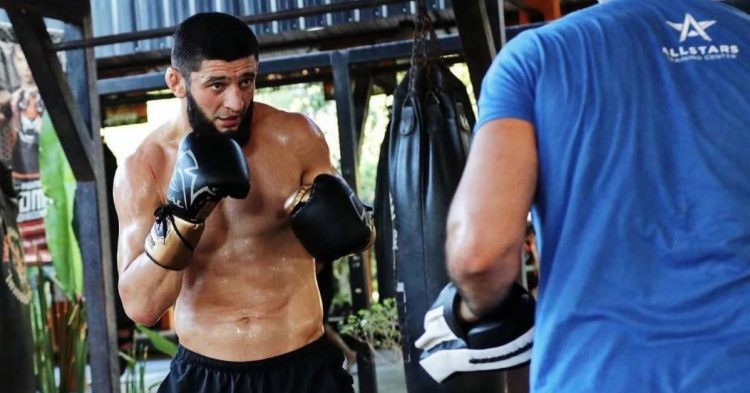 Khamzat Chimaev has quickly risen to the top. With three back to back victories in less than three months inside the UFC, Chimaev has a bright career going forward. Chimaev was last seen inside the octagon against MMA veteran Gerald Meerscheart at UFC Fight Night where he picked up a brutal first-round KO win to register his second straight victory at the Middleweight division. Heading into his second fight inside the octagon, Chimaev has had problems landing a fight. The Chechnyan fighter has called out several fighters including the likes of Stephen Thompson, and Nate Diaz.

Khamzat Chiamaev is managed by Ali Abdelaziz of the Dominance MMA. Speaking about the difficulties in booking Chimaev’s next fight, Abdelaziz took to Twitter and hinted at Chiamaev’s future plans.

“Advice for all the guys turning down Khamzat Chimaev. Fight him now before he gets better. He’s only fighting MMA for three years.” Ali said.

Earlier, UFC President Dana White had stated that he is looking for a main-event slot for Khamzat Chimaev. The Chechnyan fighter’s popularity has only risen since his KO win, and fight fans are now more than excited to see him back inside the octagon.

Also Read I Nate Diaz Rains Down On Dustin Poirier

Neil Magny is an impressive striker with a solid ground game. He dominated Robbie Lawler for the better part of the entire fight and showed great ground game against the former champion. Additionally, Magny has a credible submission game to back his skill-set and could be a great threat to Khamzat Chimaev’s rise.