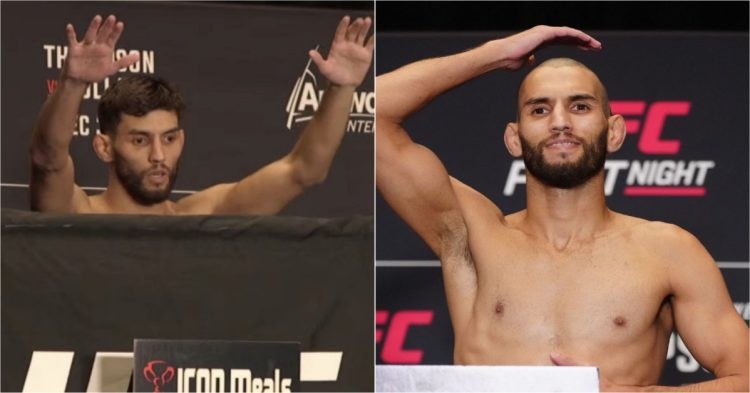 Matt Schnell is scheduled to take on Matheus Nicolau on the main card of UFC Orlando. Although Nicolau made weight for the fight without much of a hassle, Schnell had some difficulties. Even though Schnell made the weight ultimately, it cost him his hair!

However, there was a huge difference this time, as Matt shaved his head to help him come under the limit of 126 lbs. As fans know, fighters get the luxury of one extra pound for non-title fights. Hence, Schnell just needed to shed the extra 0.5 lbs to make the weight. Hence, he made weight after shaving off his head.

Wonderboy and Trailblazer are official for the #UFCOrlando main event pic.twitter.com/LkKCiKj31e

Including Matt, every fighter from the main card made weight at the end of the weigh-in ceremony. welterweight fighters, Stephen Thompson and Kevin Holland weighed in at 170 lbs and 170.5 lbs for their main event fight. The only fighter to miss weight was Phil Rowe, who missed weight by 1.5 lbs (173.5 lbs) for his welterweight bout against Niko Price on the prelims.

The prelims bout between Amanda Ribas and Tracy Cortez got axed completely, as officials confirmed it during the ceremony. They cited medical issues from Cortez’s side as the reason for cancelation.

Matt Schnell (MMA record 16-6-1) is the no. 7 ranked flyweight fighter in the UFC flyweight division. He is taking on the 6th-ranked contender Matheus Nicolau. However, it does not look like he had the smoothest weight cuts for the fight. Although this method may seem unique, Matt is not the only fighter to cut his hair to make weight. Recently, UFC fighter Shanna Young did the same.

At UFC Vegas 64, Young was fighting Miranda Maverick. Despite two attempts, she could not come under the flyweight limit of 126 lbs. On her third attempt, she had to make a drastic move to make the weight and she decided to chop off a big portion of her hair. Before her, UFC veteran Jeremy Stephens set the precedent for his PFL bout.

For his PFL 4 fight this year, he not only shaved off his head, but he also shaved off his beard. Although it is not something fighters want to be a part of, it does look like Matt Schnell has become the latest one to join the club of fighters who sacrificed hair to make weight.