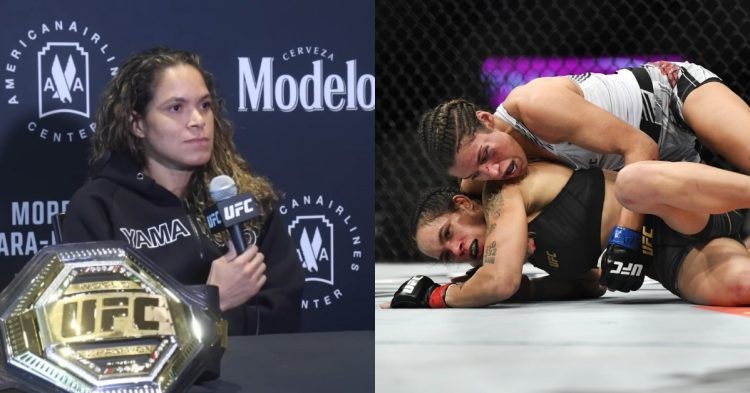 Amanda Nunes is all set to fight Julianna Pena for the second time at UFC 277 this weekend in Texas. Their previous bout will go down in the history books as one of the most shocking upsets in UFC. Despite being a massive favourite to win, Amanda Nunes crumbled in the second round of the fight and Julianna Pena took the opportunity to choke her out.

A result like that can shake up even the toughest of fighters. When a heavy-favourite loses in such a fashion, it makes them wonder if they have lost their ability to fight or not. Amanda Nunes was no different as she also went through the same after UFC 269. In a recent press conference for UFC 277, Nunes spoke about her thoughts of retiring after the loss to Pena.

“You know, of course like, I was like a little bit like yeah maybe like, now I’m good. So you know like no was in the way that I wanted to go out of course. But if I have to go enjoy my life, I’m so happy to do. You know I did so much for this sport and the sport did for me as well. So I did everything already that I want from my career. At that point, I kinda like, maybe I retire maybe not. We’ll see. Let’s see how my head is, how I wake up tomorrow to see.”

Nunes went on to add that she was definitely sad after losing the fight. However, that sadness motivated her to come back stronger instead of retiring. She drove her way back home with her family instead of taking a flight. Nunes revealed that the long drive helped her to clear her mind and it also gave her the motivation to leave ATT to set up her own gym.

What is next for Amanda Nunes after UFC 277?

Amanda Nunes is clearly motivated to get back the UFC Women’s Bantamweight title from Julianna Pena. She is happy with how her camp went and it does seem like she is also injury free heading into the rematch. So there can be no excuses this time around for The Lioness. Judging by the betting odds, it does seem like the fans and the pundits are favouring her to regain the title.

If she does manage to beat Pena, Nunes will once again become a champ-champ as she will have the both 135lbs and the 145lbs belt on the mantle. However, another loss to Pena will make a very significant impact on her legacy in the sport. At the moment, she is considered the women’s GOAT in MMA. UFC President Dana White stated that she will still be the best to ever do it despite the outcome of the upcoming PPV.

However, that opinion may change if Pena gets the victory and moves on to fight Valentina Shevchenko in the future. Shevchenko has already beaten Pena and will be favoured to do so once again. In that case, Valentina will become only the second UFC female fighter to hold two belts simultaneously. The GOAT conversation will definitely have a different twist to it if that happens.

But, If Amanda Nunes does win, she has stated her wish to continue fighting in both bantamweight and featherweight. However, there is no credible opponent for her to face in either division. The only big money fight left for her is the Valentina Shevchenko trilogy fight. It looks like the company is definitely open to making that fight happen.

The biggest fight in women’s MMA right now will be a fight between Amanda Nunes and Kayla Harrison. Nunes expressed that one of the main reasons for her leaving ATT was Kayla’s involvement in the gym. So there is already a storyline that the UFC can take advantage of. But Harrison has recently signed another deal with PFL. Hence, making the bout will not be the easiest task in the world.