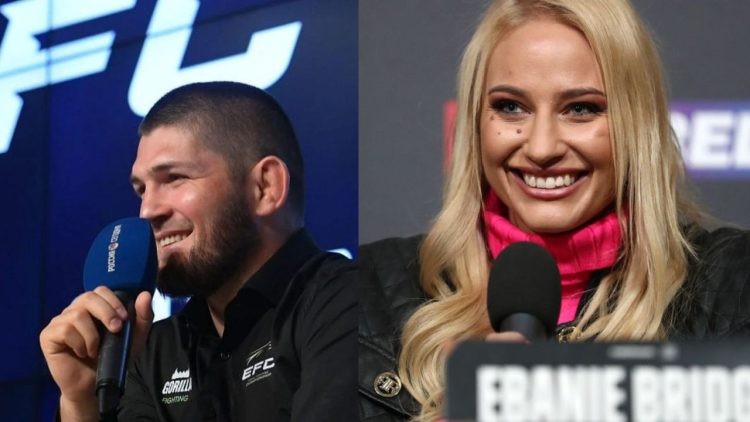 Despite a dominant and respectable tenure with the UFC, Khabib Nurmagomedov has become the subject of controversy. Although he is mostly focused on his new role as a coach, Khabib still finds time to share his hot takes on topics.

Talking about the UFC ring girls, Khabib naturally had some things to say. However, his comments have come off as insensitive to Aussie boxer Ebanie Banks, among other people. Interestingly, Ebanie, a current IBF Bantamweight champion also did a stint as a ring girl herself prior to boxing.

Talking about the idea of ring girls for Eagle FC, Khabib said, “I don’t want to offend anyone, ring girls are the most useless people in martial arts. What is their function? I have a question, you can show it is the second round that is on the screen. I realise that it is a history. History knows many mistakes. We read history to avoid mistakes of the past in the future. If we look in the history it says they are useless. That is my personal opinion.”

Naturally, Ebanie, a former ring girl herself, had a different view on the matter. “I was a ring girl and I love combat sports, I grew up with it, so for me to be at the fights. I got paid mad money, probably more than some of the fighters to sit ringside.” She adds, “Why are people who aren’t us, trying to take our jobs away from us? We love it, I loved being a ring girl. I don’t think it’s useless.

According to her, Khabib’s comments were in poor taste and borderline sexist. Previously, UFC has come under scrutiny with rumors that ring girls are paid more than some fighters.

Previously, there has been history with Khabib Nurmagomedov and ring girls including Anna Galochkina who covered up in his presence during a Russian MMA event in 2016. “He’s not only the best athlete but the man for me! He’s a pride of Russia and great MMA fighter. Of course, guests of the event were shocked seeing a ring girl putting on a longer skirt so fast. I respect the views and religion of Khabib and I didn’t want him to feel uncomfortable.”

Additionally, Nurmagomedov’s comments about ring girls were under immense scrutiny with most western fighters opposing the idea. Even Conor McGregor gave his reply on the matter through a meme, which was also retweeted by UFC Ring Girls, Ariana Celeste, and Britney Palmer.

Almost all combat sports have ring girls attached to them in some way for a very long time. However, what do you think, should fighting promotions have ring girls or not? Leave us your thoughts in the comments below.