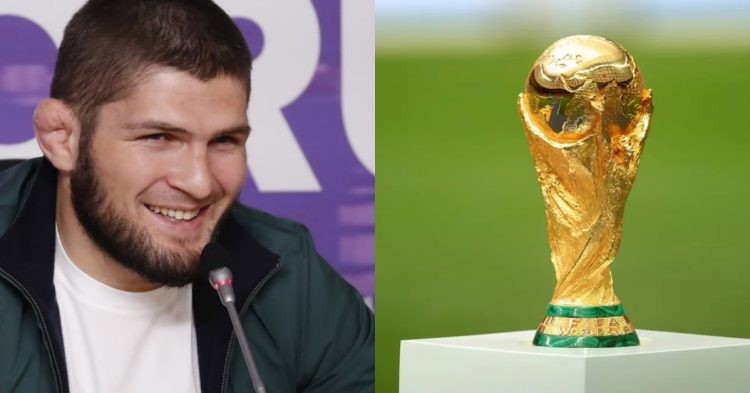 Khabib Nurmagomedov has his say on the 2022 soccer World Cup. (Credit: Twitter)

The FIFA 2022 soccer World Cup is currently rocking the world! Fans all over the world, are buzzing about the mega event and speculating which team will lift the trophy. In 2018, France defeated Croatia to win the tournament and became a two-time world champion. However, MMA legend Khabib Nurmagomedov is expecting a new champ this time around.

Khabib Nurmagomedov was in Toronto, Canada for an event. During a Q&A session at the event, Khabib was asked about the ongoing event. Nurmagomedov revealed that he started following the sport in1996. He watches the sport on a regular basis. Hence, fans wanted to know his prediction about which nation will emerge victorious in this edition of the event.

“This world cup, I’m gonna choose 3 team and maybe you guys don’t like this. I think England gonna do very well, England. I think Brazil, Brazil is very good and I think Netherlands.”

“But there is I know Argentina, France, (and) Spain. Like at lot of good teams. There is like Croatia, Belgium, and Denmark. They very tough team you know. But I just choose three team and lets see what’s gonna happen.”

The Eagle did not make a concrete prediction about the event, but the teams he named, are certainly strong candidates to lift the trophy. In their first matches, England defeated Iran by 6-2 and the Netherlands defeated Senegal 2-0. While Brazil will play its first match of the 2022 world cup against Serbia.

Mixed Martial Arts (MMA) fans know that Khabib Nurmagomedov is a massive soccer fan. Not only is he a fan, but Khabib is also a decent soccer player as well. Khabib displayed his speed and agility on the ball in a recently released video and it made fans tremendously excited. It is also no secret that Khabib is a big fan and a friend of Cristiano Ronaldo.

Since his Real Madrid days, Nurmagomedov stayed in touch with Ronaldo and supported the Portuguese superstar. Khabib even went to Manchester earlier in the year to watch Ronaldo play.

However, he did not name Portugal as one of the contenders to win the 2022 FIFA World Cup. Ronaldo revealed that the ongoing World Cup will not be his last tournament. Ronaldo even wants to play in the upcoming Euros, which will take place in 2024.

Hence, it is surprising to see that Khabib does not consider Ronaldo’s team good enough to be the world champs. However, Khabib still supports Cristiano on an individual level.

During his recent bad patch of form for Manchester United, the 34-year-old reiterated his trust in Ronaldo and stood by him publicly. Khabib even did the CR7’s trademark celebration after scoring a goal in a friendly match at the time of the UFC 280 fight camp.

Do you agree with Khabib’s picks for the ongoing soccer World Cup? Which team are you supporting in the event? Let us know in the comments down below.