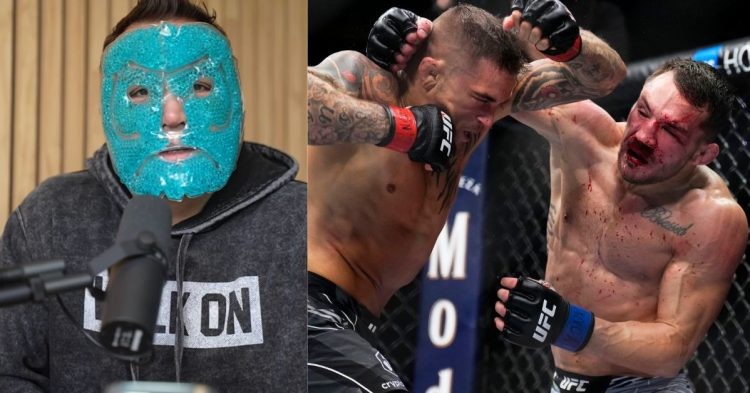 Michael Chandler has proved at UFC 281 that no matter the outcome, he will always put on a banger performance. Chandler lost his fight against Dustin Poirier at UFC 281, but that fight later earned the ‘Fight of the Night’ award.

In that fight, Chandler absorbed a significant amount of damage at the hands of Poirier. However, ‘Iron Mike’ proved that he certainly belongs at the top of the division. Chandler is now recovering from his previous injuries and while doing that, he came up with a hilarious way to entertain the fans.

In a recent video, Chandler can be seen wearing an ice face mask while reading out mean fans’ tweets in a sarcastic way. The first tweet goes:

“Chandler fights like he was in a Van Damme action movie. The problem is he had a professional fighter in front of him, not a stuntman.”

Chandler takes this as a compliment as he believes that being in a Jean-Claude Van Damme action movie is a “feather in Ice Face’s cap.”

Chandler replied: “I’m not worried about taking losses because losses are a common thing in life.”

“So why don’t you go back to whatever basement that you’re tweeting from and have a great day and watch a couple of Van Damme movies but – do it with a smile on your face.  Do it with a little bit of love in your heart.”

In the next fan tweet, someone said: “Michael Chandler always proves that he doesn’t belong at the top of the division. Man has fought world-class fighters and only won against don’t wanna retire fighters.”

Chandler definitely belongs at the top of the division with fights against some of the toughest fighters in the division. He also reflects on that while saying he has always chosen the hardest fighters since he joined the UFC.

Michael Chandler is certainly one of the most entertaining fighters in UFC. Since he joined the promotion, he has faced some of the most dangerous fighters in the lightweight division. Chandler wants to fight another dangerous striker as he has called out Jorge Masvidal.

“But tell me that wouldn’t get the juices flowing of the entire mixed martial arts world. Michael Chandler vs. Jorge Masvidal for the BMF belt. ‘The Rock’ walking in with it over his shoulder and then handing it to me 15 minutes later.”

Chandler is 2-3 in the UFC, but in all of the five fights, he has entertained the fight fans with his electrifying performances. With all of the banger performances, Chandler believes he is worthy of the BMF title now.

Chandler is coming off a submission loss to Dustin Poirier at UFC 281 and now aims for a fight against the BMF champion Masvidal. Gilbert Burns, who is a teammate of Chandler, is set to fight Masvidal in a potential matchup next; however, the UFC has yet to make it official.