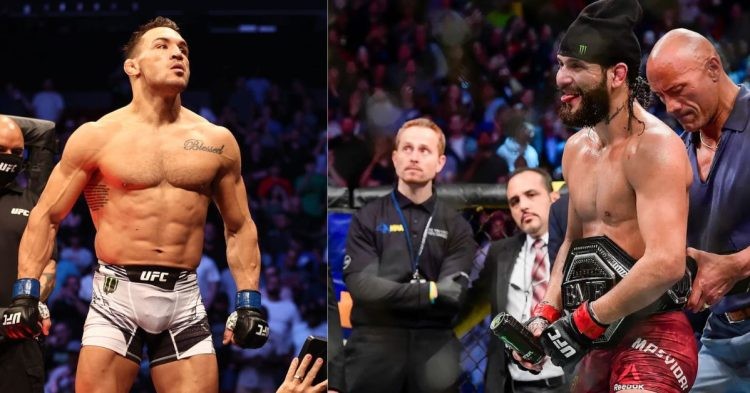 Michael Chandler has called out Jorge Masvidal for the BMF title in a recent interaction with Brett Okamoto following his third-round submission loss against Dustin Poirier back at UFC 281. Chandler, who has been part of some of the most exciting fights in recent times, has set another great match-up for the UFC fans. It remains to be seen if UFC feels the same way.

Michael Chandler, confirming his move to the UFC’s welterweight division expressed his interest in a potential fight with Jorge Masvidal for the BMF title. And he wants Dwayne The Rock Johnson to be a part of it all over again. UFC 244 featured the Black Adam star grace the UFC Octagon with his presence as he offered the BMF title to Jorge Masvidal, who defeated Nate Diaz for the symbolic UFC title inside Madison Square Garden in New York.

Both Masvidal and Chandler are exciting fighters and never fail to grab the attention of fight fans. Their fighting style relies heavily on striking, and with serious power in their hands, it makes for an explosive match-up.

Michael Chandler believes he is the true BMF in the UFC

Michael Chandler has had only five fights in his UFC career and he has taken on some of the best fighters that the UFC has to offer. Having faced the likes of Dan Hooker, Charles Oliveira, Justin Gaethje, Tony Ferguson, and Dustin Poirier, Chandler’s addition to the UFC’s lightweight division has been truly special.

It’s an exciting match-up and one that is certain to get the attention of fight fans around the world. Masvidal has expressed his interest in fighting at UFC London, set to take place in March in 2023. It’s a good four-month rest for Chandler, and if UFC can come to terms with it, a rematch for the BMF title is as exciting as it gets.