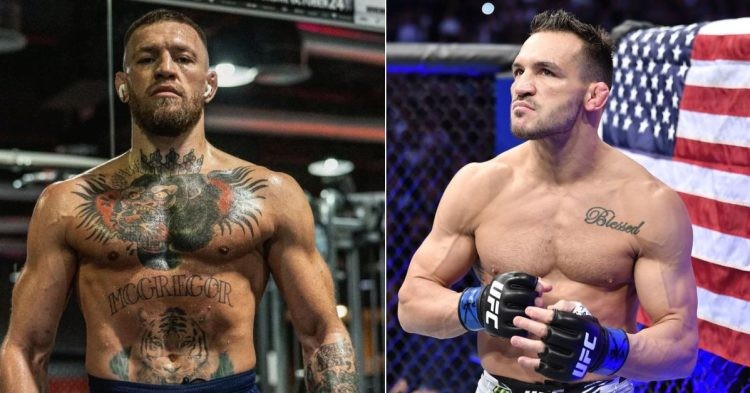 Michael Chandler is quite huge for a fighter in the UFC’s Lightweight Division. Regardless, he has no plans of going up a weight class to the welterweight division.

After his emphatic win over Tony Ferguson at UFC 274, Chandler called out Conor McGregor for a mega fight at 170 pounds. Chandler believes McGregor is “at his biggest, at his baddest, at his most dangerous” in the welterweight division and wishes to take the challenge there, all the while admitting that cutting weight is hard on him.

Speaking on a fight with McGregor, Chandler said, “He looks big right now. I’d love to fight him at 170. I’d love to not make 155 for it. I think we would do staggering PPV numbers. I think he knows that I am the type of opponent that he wants to come back and fight.” He said.

It’s hard not to agree with Chandler. The former UFC title challenger has proved himself to be one of the most exciting fighters in the history of the sport. Chandler doesn’t shy away from a slugfest, and the fact that he has received a UFC bonus in 3 of his 4 UFC outings, proves just how entertaining he can be.

Going against someone like Conor McGregor certainly adds more flare, and it’s safe to say that the PPV buys for that event are going to be as Chandler put it, “staggering”.

“Making 155 is not easy for me but I came into the UFC, and signed the contract saying that I was a lightweight. 31 fights, and hundreds of wrestling matches, I have never once pulled out of a fight, and I have never once missed weight. This has never been a question because I am a professional.”

“But, there’s definitely some fights that I would love to take at 170. But I don’t think I am a natural 170-pounder, more height, and distance than anything.” He further added.

Chandler blames his height and distance as the main reason why he won’t fight in the welterweight division and rightfully so. At 5 ft 8 in, he is not a tall lightweight. Going up a weight class against “bigger” men is asking for trouble. Not that Chandler’s power and his wrestling will not translate well at 170-pounds, but his height and reach disadvantage will be too crucial to maintain winning ways!