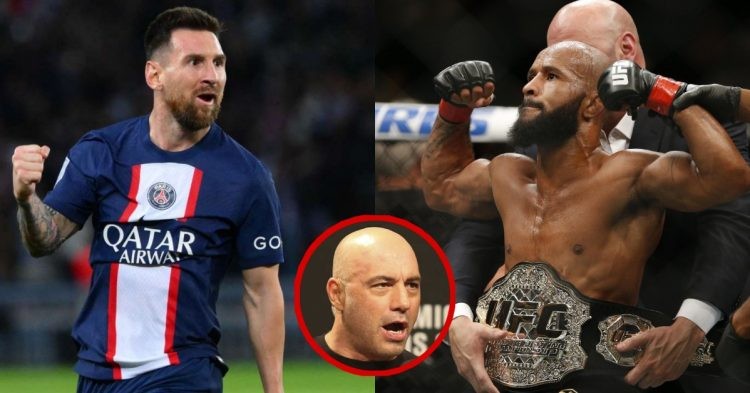 Lionel Messi is a mythical figure in the sport of Soccer. He is one of the most elusive players on the pitch when he plays. Witnessing Messi play football, can be considered a joy for the eyes that very few players can provide. Recently, UFC commentator Joe Rogan revealed that Demetrious Johnson is the Lionel Messi of Mixed Martial Arts (MMA).

When he asked Joe who was the Messi of MMA, without a second of hesitation, Joe named Mighty Mouse. Although Rogan puts the former UFC middleweight champion, Anderson Silva, into consideration, Demetrious Johnson is the clear favourite for the veteran comedian.

Demetrious Johnson is currently the ONE Championship flyweight champ. On August 27th, Johnson knocked out Adriano Moraes via a flying knee to win the belt. However, fans may remember the illustrious career that he had in the UFC. DJ beat Joseph Benavidez at UFC 152 via split decision in 2012 to win the inaugural UFC flyweight championship.

It was the beginning of a historic run that saw Johnson defend his UFC belt 11 times in a row! Considering the fact that Georges St-Pierre, Anderson Silva and Jon Jones were all in their prime at the time and nobody could even come close to beating the record that DJ set, is an indictment of how special Mighty Mouse’s run really was.

However, it is not just the fact that he won the fights, DJ was popular for how dominant and flashy he was in the Octagon as well. His flying arm-bar submission of Kyoji Horiguchi remains the most impressive submission that UFC fans have ever witnessed. But, Demetrious Johnson never got the praise that he deserved because he did not fight at the heavier weight classes.

What is your thought on the matter? Do you think Joe Rogan is right to name Demetrious Johnson the GOAT of MMA? Let us know in the comments down below.