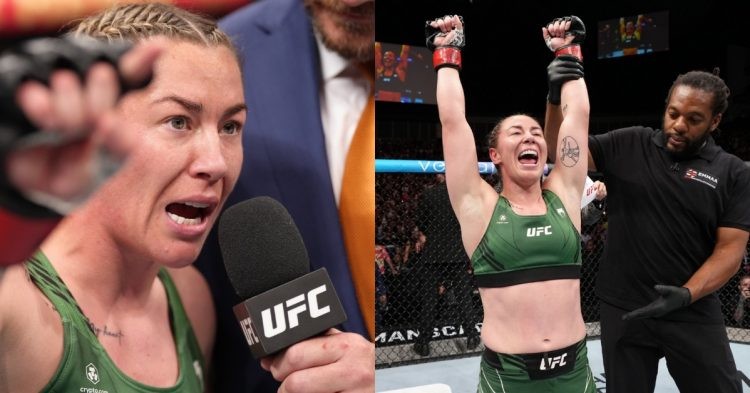 Molly McCann does it again! She just knocked out Hannah Goldy on the main card of UFC London. Ironically she knocked out Luana Carolina in March in the same arena with the same spinning elbow. Although her last knockout came in the third round of the fight, Molly got rid of Hannah in the first round itself this time.

The round began with Meatball Molly storming towards Hannah, which up instant pressure on her. However, Molly’s over-eagerness almost cost her as Goldy almost got a takedown. But the 32-year-old showed an incredible takedown defence and kept the fight on the feet. But it did allow Hannah to get some confidence.

The Florida native opened up her striking as she thought the threat of a takedown will make Molly more conservative. But she was very wrong as it only made Molly more aggressive and the hometown girl backed Hannah up towards the face. During an exchange, Molly landed a massive spinning elbow which rocked her opponent.

Meatball mania is taking the world by storm 🌎

McCann immediately followed it up with a flurry of punches which forced the referee to stop the bout at the 3:52 minute mark of round 1. With this win, Molly gets the 6th win of her UFC career.

Drake has placed a $2.3 million bet on Molly McCann and Paddy Pimblett

Drake had a reputation of being a cruse for the fighters that he supports. But Israel Adesanya broke that curse at UFC 276 after beating Jared Cannonier in the main event of the PPV. Now with Molly getting the job done, it seems like the Drake curse is almost over.

With this win, Molly puts herself in the position to fight higher-ranked contenders. The divisional champ Valentina Shevchenko has almost cleaned out the division. Hence, Molly may find herself standing across the Octagon from The Bullet if she can keep her winning momentum.

Paddy Pimblett, as Promised, T-Bags Jordan Leavitt After Choking Him Out in a Thriller at UFC London