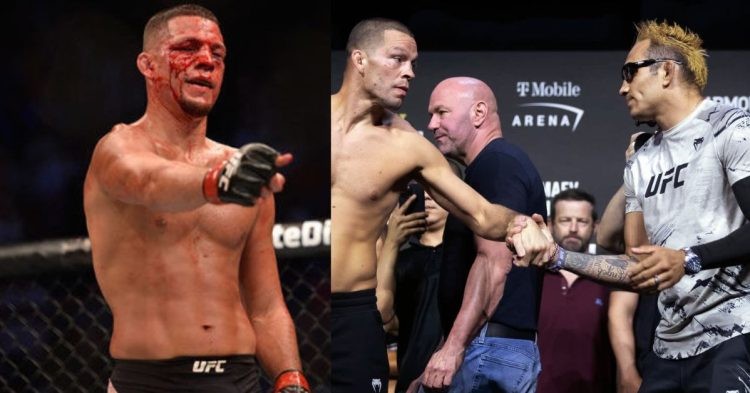 Nate Diaz truly got the hero’s exit after his last night’s performance in the UFC 279. In the 4th round, Nate submitted Tony Ferguson via a guillotine choke to wrap up the main event. Also, Tony was submitted for the first time in his career.

After the fight, Nate appeared in the post-fight interview and revealed that he has received a lot of money to take the fight against Ferguson. After all the fiasco and antics before the main event, all fighters from the main card got their opponents switched.

However, it turns out to be better as the fans wanted to see Nate fighting Tony as he parts his ways from the promotion. When asked about how much money he was offered Nate sarcastically replied: “I lost count”.

However, it has not been disclosed how much each fighter got paid for the event, but it can be assumed that the fighters headlining the main event were paid a lot. Talking about the negotiations after the incidents and the weight issue, Diaz stated:

“I was like if you want to switch people on me on one f***ing day after I’ve just cut 15 pounds to make me change my opponent, you’ve got to give me more money than you give all of the champions in this organization. They were like ‘stupid we already gave you’ then I was like ‘well I want more than that then’.

Nate Diaz on how the negotiations went to change his opponent.#UFC279 pic.twitter.com/r15cOVGIvp

After a successful career in UFC, Diaz hinted at a move to boxing or other combat sports whilst aiming for Conor McGregor’s loss against boxing legend Floyd Mayweather in 2017. However, Nate has also stated that he will return to UFC at some point to fight for a title.

UFC 279 didn’t go as planned but it only got better after the pandemonium and the hype. All the fighters from the main card were switched and given a new opponent after Khamzat Chimaev missed his weight by a huge mark. He was set to fight Nate Diaz but instead was rescheduled to fight Kevin Holland.

According to Dana White, this has never happened before in the history of UFC. In the post-fight press conference of UFC 279, a reporter asked Dana White if any fighter has received any salary bump for switching fights. To which he replied:

“Well, these guys all have deals… Everybody has a deal.”

While it has not been disclosed yet about the fight purse for UFC 279, it is safe to assume that the fighters from the main card got paid a fine amount. As mentioned, Diaz has received a hefty amount of money to fight Ferguson.

Nate was given a standing ovation from the fight fans attending the event after he submitted Tony in the fourth round of the main event. Diaz also got an extra $50K for the ‘Performance of the Night’ bonus along with Irene Aldana, Johnny Walker, and Jailton Almeida.