Most Boring Title Fight in UFC History? Twitter Trashes Rose Namajunas for Her Lacklustre Fight Against Carla Esparza at UFC 274 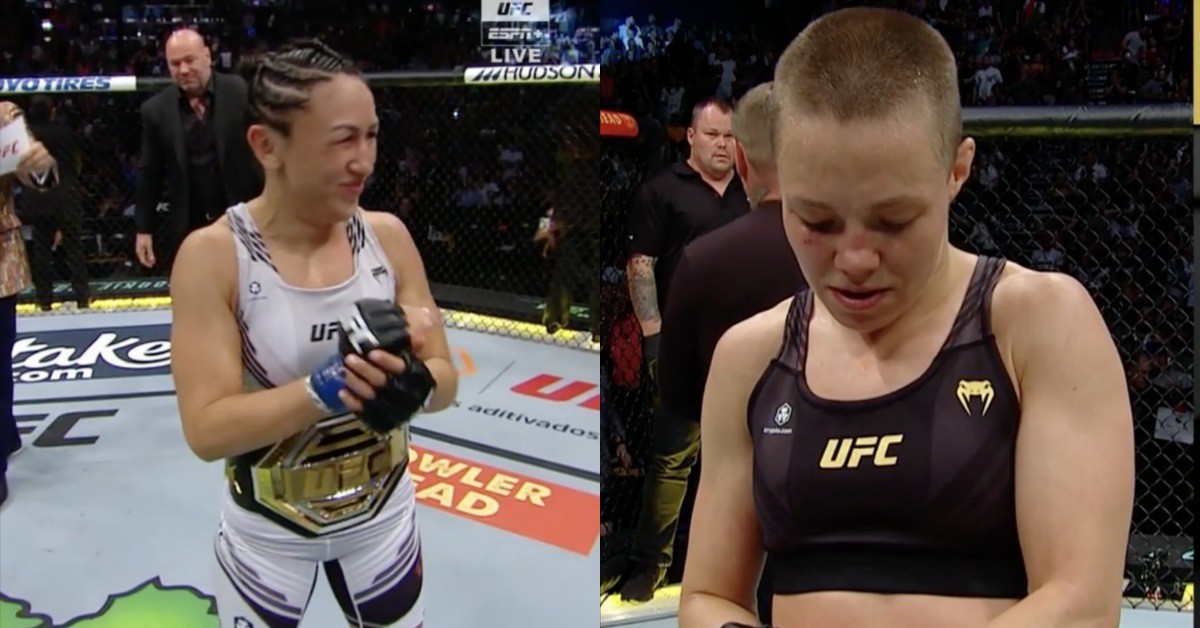 Carla Esparza and Rose Namajunas at UFC 274. (Images via Twitter)

UFC Strawweight champion Rose Namajunas just took on Carla Esparza in the Co-main event of UFC 274. They previously fought in 2014 when the Cookie Monster submitted Rose and she became the very first 115lbs champion in the UFC.

Esparza is perhaps the best wrestler in the division. Her wrestling has been a problem for a lot of fighters lately. Carla was on a 5 fight win streak heading into UFC 274. However, Namajunas is not the same fighter that Esparza fought before. In the past 8 years, Rose has become one of the most complete fighters in the UFC.

From a submission win over Michelle Waterson to a head kick KO of Zhang Weili, Thug Rose has accumulated a hall-of-fame worthy resume since her first loss to Carla Esparza. So the question is, how did the rematch go? Let’s find out.

Almost the entire first minute went by without any strikes landing from either opponent. Carla kept her distance so that she can level change whenever she had the chance. Neither fighter took any initiative to force the offence early on. Rose was clearly wary of Esparza’s wrestling as she used her feet movement to stay away from the challenger. All in all, it was a very uneventful round 1.

It was Esparza who finally tried to break the monotony and shot for a takedown. But the champ successfully defended the attempt. However, that was pretty much all that happened in the round. Esparza finished the round with a leg kick that garnered a huge reaction from the crowd.

Rose Namajunas has thrown less strikes than years she was alive when Pat Barry started dating her. #UFC274

Coach Trevor Wittman tried to fire up the champion by asking her to pick up the pace ahead of the third round. It definitely seemed to have some effect on Rose as she started to push the pace. But it allowed Carla to find an opening and she attempted another takedown. But similar to the first one, Rose scrambled out of it immediately. Although both ladies threw a lot of strikes, nothing seemed to land.

“Hear the boos? You’re doing it right.” Pat Barry tells Rose Namajunas. I’m not surprised to hear him say that, they want to stay away. But they ain’t landing any offense to win rounds. Don’t win the battle of defending takedowns to lose a war … this is coin flip right now.

The fight was certainly one of the most boring title fight in UFC history. Neither even made an honest effort into making the fight interesting or entertaining for the fans. The reactions on Twitter were not really kind towards the bout either!

The way Rose Namajunas is fighting right now is how people who hate Israel Adesanya think he fights. #UFC274

After two more uneventful rounds, Carla Esparza became the new UFC Strawweight champion via split decision. Despite a new champion being crowned, the crowd booed the decision heavily as the fight was an utter dud!