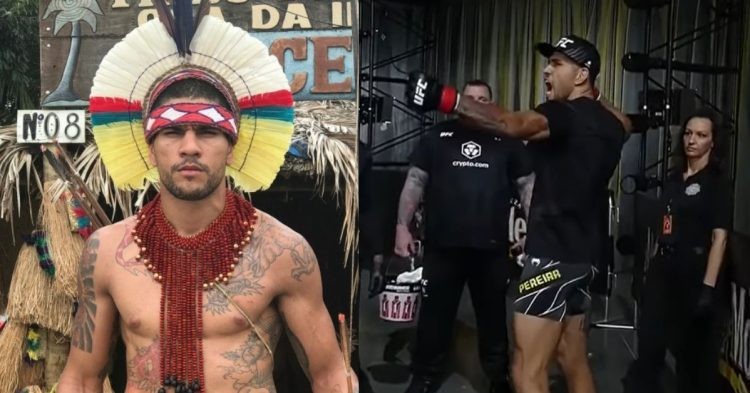 Alex Pereira will meet UFC Middleweight champion Israel Adesanya for the third time in his career in the main event of UFC 281. ‘Poatan’ has already beaten Adesanya in kickboxing – first by decision and the second via a vicious knockout. This time they are ready to settle their rivalry inside the UFC Octagon.

Whenever Pereira makes his walkout, he uses a signature ritual with a bow and arrow. Ahead of UFC 281, ‘Poatan’ explains about the significance of the bow and arrow ritual. In a recent interview, Pereira said:

“When I first started to train in kickboxing, my first teacher had indigenous roots. I went home the same day and asked my mom. She said my grandparents were indigenous.

It made me feel more confident. We wanted to resurrect my origins and indigenous culture. I made a ritual with the bow and arrow. Then a sequence with the indigenous music and that’s how it started.”

Pereira is a native Brazilian and he uses this ritual to connect with his indigenous roots to summon confidence before a fight. His grandparents were indigenous and through this walkout, Alex pays homage to his culture.

When Pereira started training in kickboxing, the gym was filled with indigenous people. Their stories motivated Pereira so much that he picked the nickname ‘Poatan’, which means stone hand. This suits Pereira as he is infamous for his devastating knockout power and the vicious left hook.

Alex Pereira loves his native roots and in the future, he has plans to do something for the indigenous people of Brazil. Apart from being a great fighter, ‘Poatan’ is also a master in archery – something that the native Brazilians are known for.

In the same interview, Pereira described the importance of preserving the indigenous culture and the native people who are forgotten in time. He wants to revive the cultural heritage and help the indigenous people in the future. Pereira said:

Watch the whole clip below:

During the pandemic, the native Brazilians had a rough time as they had trouble feeding themselves. To help those indigenous people, Pereira left Sao Paulo and went to Porto Seguro to donate food for them. In the future, Pereira hopes to use his fame and the platform of the UFC, to help the native Brazilians.

Pereira takes on his kickboxing nemesis Adesanya in a much-anticipated title fight at UFC 281, which takes place on 13th, November at Madison Square Garden.