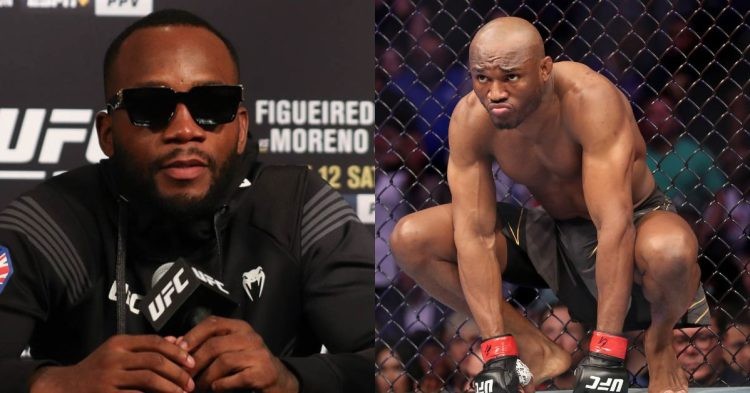 Leon Edwards shocked the entire world after he knocked out Kamaru Usman in the final minutes of the fifth round to dethrone the Nigerian Nightmare to become the new undisputed welterweight champion at UFC 278.

After getting dominated by Usman for a significant period of time, it looked like Edwards would lose the rematch. However, the British welterweight snatched victory from the jaws of defeat as he landed a brilliant head kick and put Kamaru to sleep.

Following his title win, Rocky made a bold claim while speaking to Ariel Helwani that he has a better ground game than his rival Kamaru Usman. He made this statement after Helwani asked Edwards about his thoughts after he took the back of the Nigerian Nightmare and locked in a rear naked choke in the first round.

“No, I knew it would have been difficult to choke you know to finish. But once I got on top of him my ground game is way better than his ground game so far as Jiu-Jitsu. He’s a wrestler he likes to be on top. They prefer to be the guy on top and I’m sure once I get on top I’ll be able to dominate the grappling part of it.”

Despite Usman dominating Edwards on the ground with his wrestling, the British welterweight did very well to not absorb any significant damage from the bottom position. Moreover, he also became the first fighter to have landed a takedown against Usman in the UFC.

Hence we can expect more improvements from Edwards in his takedown defense and it would be a very close trilogy bout as both welterweights will learn from their mistakes.

UFC President Dana White indicated that Leon Edwards’ next title defense would most likely be against Kamaru Usman in a trilogy fight in London. It is needless to say that Rocky has a lot of options as his arch-rival Jorge Masvidal and few other fighters have called him out.

While having a conversation with Ariel Helwani, Leon said that he is down to fight Usman in a trilogy bout. However, Rocky laid a condition that the Nigerian Nightmare has to come to his hometown to fight him next.

With Kamaru ready to fight Leon Edwards in the United Kingdom, the possibility of the two welterweights clashing once again becomes very high. It is needless to say that their trilogy fight would be just as exciting as their rematch.