“My Hands Are Bigger Than Brock’s”- Tony Ferguson Makes Absurd Claims About Brock Lesnar, Says He Has Bigger Hands Than the Former UFC Heavyweight Champion 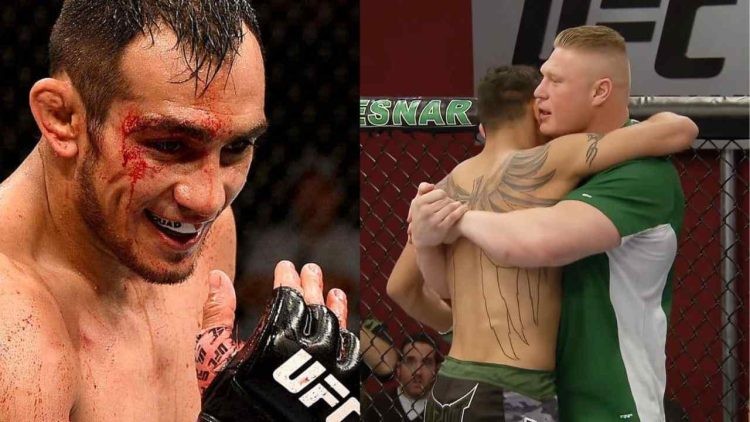 Tony Ferguson is ready to make his ‘debut’ at Welterweight. Following a four-fight skid at 155 pounds, Tony feels that a move up to 170 is the way to go. El Cucuy takes on Li Jingliang in the co-main event of UFC 279 on Sep 11, at the T-Mobile Arena in Las Vegas, NV.

The most interesting part about this match-up is Tony’s ‘return’ to welterweight. Speaking at the UFC 279 Media day he says, “Went back to the drawing board for two months, started lifting heavy, because I knew what I was gonna do subconsciously.” Following his loss to Michael Chandler at UFC 274, Tony reveals that the plan was to immediately go up to 170.

After putting the work in, Tony is brimming with excitement for his fight. In a behind-the-scenes UFC vlog, Ferguson can be seen selecting his equipment for the fight. Struggling to put on the biggest size gloves Tony jokes, “My hands are bigger than Brock’s (Lesnar) you know that?” Safe to say, Tony is in good spirits for this fight.

This will be Tony Ferguson’s first fight at welterweight since 2011. Tony won ‘The Ultimate Fighter 13’ as a welterweight, kickstarting his career in the UFC. Thus, this is a return that has been a long time in the making.

Tony mentioned Brock Lesnar, comparing his hand size to the latter. In case you didn’t know, Brock Lesnar was Tony Ferguson’s coach back on TUF 13. El Cucuy was Brock’s third pick for the team and eventually worked his way to the top of the competition.

Under Lesnar’s guidance, Tony went on to win the tournament by defeating Ramsey Nijem via first-round KO. The Tony Ferguson vs. Ramsey Nijem fight was the headline of the TUF 13 event, which took place in June 2011. Even years after that victory, Tony has revealed on occasions that he still keeps in touch with Brock.

The mentor-disciple relationship is crucial in all walks of life. Thus, Tony shares a special relationship with Brock that has helped him blossom into the fighter he is today. In many cases, coaches build fighters from the ground up and elevate them to new levels, sometimes making them the best fighters to ever grace the sport.