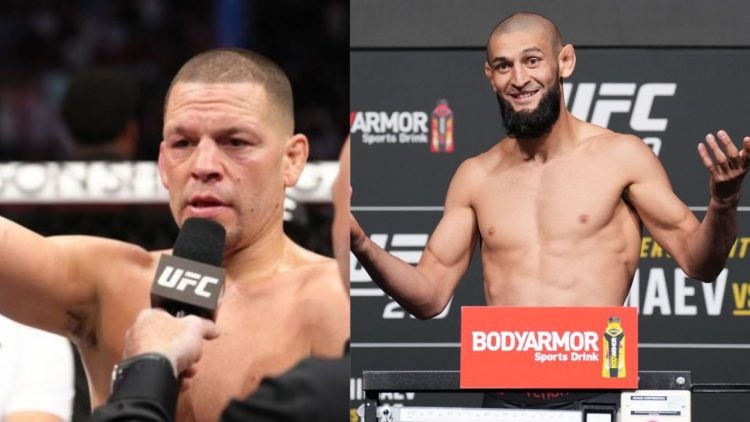 In a newly released video by the UFC, Nate Diaz is seen saying some important things. Right after his victory against Tony Ferguson at UFC 279, Diaz embraces his coach, his brother, and his team. Interestingly, Nate also revealed a key piece of information.

Coming into fight week Diaz was prepared to take on Khamzat Chimaev. However, due to Chimaev missing weight by 8lbs, Tony Ferguson took his place instead. Prior to this, Nate revealed that he did not care about fighting Khamzat and implied that he stopped preparing for him too.

However, in ‘UFC 279: The Thrill and the Agony | Sneak Peek’, Diaz shares some different thoughts post-fight. Speaking to his coach, Nate says, “He wasn’t wrestling. The whole camp I didn’t punch, I was doing wrestling, so I was getting tired of throwing those punches.”

As such, it would appear that Nate did in fact prepare thoroughly to fight Khamzat Chimaev. Thus, it can be said that maybe his previous statements were to throw off the Chechen fighter and give him a false sense of security. Although some may call it cheap tactics, we have to remember that mental warfare is something Nate specializes in.

Despite preparing for a different opponent, he was comfortably able to beat Ferguson. After some hectic exchanges and showing off, Nate capped off his performance by disposing of Tony Ferguson via 4th round guillotine choke. After his fight, Diaz announced he is temporarily leaving the UFC and is now a free agent, ready to take over “a new sport”.

What’s Next For Nate Diaz?

The Stockton Slugger is one of the biggest names in combat sports. Headlining some of the UFC’s biggest PPVs of his time, Diaz is a bonafide superstar. Thus, a lot of big companies and names are sure to be on his tail.

Im only going to fight the rock
Otherwise I’m goood

As such, there have already been discussions regarding Nate at BKFC. Recently, BKFC President  Feldman revealed some plans regarding a potential Nate Diaz vs. Mike Perry bout. Feldman believes that the fight would be “a fan’s dream fight.” Moreover, a potential WWE and influencer boxing fight could also be on the cards.

However, Diaz might have some other plans before all that after seemingly calling for The Rock in a recent tweet. Whatever Nate chooses to do, it’ll definitely be worth the watch. What do you see Nate doing next? Leave your thoughts in the comments below.