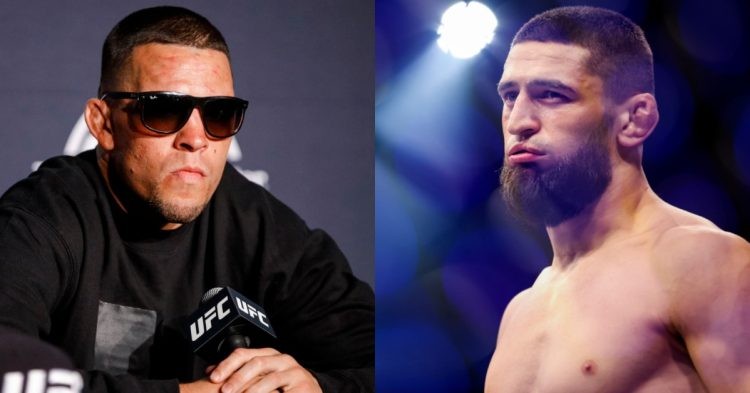 Khamzat Chimaev will headline UFC 279 on September 10th. He will be doing so after only 5 fights in the promotion. Hence, it is very evident that the company is fully expecting him to be a massive star in the future. His opponent for this Saturday, Nate Diaz, thinks the pressure is on Chimaev to make an impression on the biggest stage The Borz has ever had!

The 37-year-old is extremely relaxed heading into the fight. Nate has had a 15-year run in the UFC. During that period, he fought for a championship once and has been a part of some of the biggest fights in company history. Hence, Nate has achieved a lot during his UFC run. Fighting him gives his opponents the exposure that they desperately need.

A good performance against Nate does wonders for a fighter’s career. Jorge Masvidal and Leon Edwards are the biggest examples of that. Hence the onus is on Khamzat to make the most of the opportunity this Saturday. Nate pointed it out during his interview with ESPN.

“If I get my a** whopped, guess what! Still got a free agent out there who’s now only, who might have just got his a** whopped, but he’s still only the no. 2 fighter in the world, cause he just f****d the champion of the welterweight division.”

“And he’s losing to the guy who are you claiming is the biggest best thing in the thing. So get it done and you better get it done because the pressure is on you motherf****r, I don’t give a f**k!” (h/t via Blacktop Buckets)

Nate Diaz was very unhappy with the match-up against Khamzat Chimaev at UFC 279. The Stockton native was hoping for a bout against someone like Dustin Poirier or Tony Ferguson. But the promotion did not pursue any of those options, instead, they offered only Khamzat Chimaev. However, Nate wanted to be done with the UFC so he accepted the challenge.

It is common knowledge in the MMA community that UFC 279 will be Diaz’s last UFC bout. His interview basically confirms that Nate will not be looking to continue fighting in the UFC. Recently Jake Shields commented that Nate may choose to re-sign with the UFC if the money was right. Nate too wants to fight Conor McGregor for the third time.

However, Nate’s comments on him being a free agent seemingly confirm that he is ready to move on. Diaz now has a new fight promotion called ‘Real Fight INC‘. On top of that, Nate has the option of fighting Jake Paul once he is not under the UFC contract. So free agency may prove to be a very fruitful next move for him.