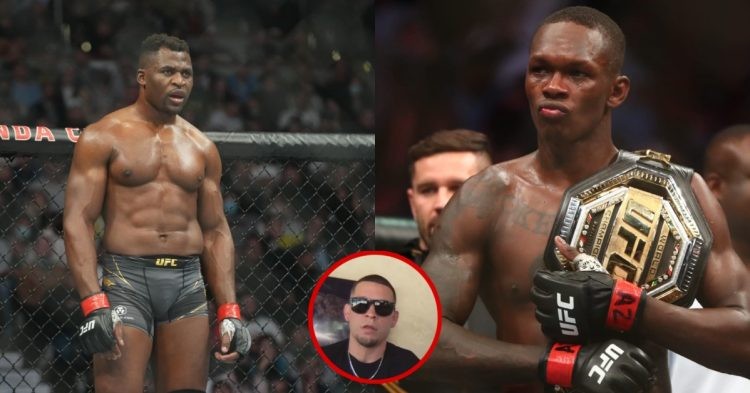 Nate Diaz is back in the headlines after his recent appearance on The MMA Hour. In almost an hour-long interview, Diaz spoke about a lot of issues that the fans were curious about. Although the interview was received positively in general, one particular claim from Diaz caught the fans’ attention.

While conversing with Ariel Helwani, Nate shed some light on what is going on behind the scenes with his current UFC contract situation.

Diaz also addressed why he does not want to fight Conor McGregor. But he also made an outrageous claim about who he thinks his true opponents in the UFC are!

Nate revealed that he was in conversation with the higher-ups of the UFC about his next opponent. According to Diaz, he would only fight either the UFC Heavyweight Champion Francis Ngannou or the 185lbs champ Israel Adesanya.

“I said the only worthy opponents they have here for me in the UFC are f***ing Francis Ngannou or Adesanya. With all due respect, I don’t even want to be fighting (them).”

Nate Diaz: The only worthy opponents they have here for me are Francis Ngannou or Adesanya…#TheMMAHour pic.twitter.com/ITigfh5Iwh

“I don’t want to fight those guys, I like those guys a lot. You know what I’m saying? But if I’m gonna fight anybody, It’s gonna be somebody who does something great like those f***ers.”

Nate Diaz has never fought above the welterweight division in the UFC. He once fought at 177lbs against Rory Markham because Rory missed weight.

But he has never gone beyond that in his career. Hence talking about fighting Ngannou and Adesanya who weigh about 265lbs and 185lbs respectively, did not go down well with the fans.

Nate Diaz has never been the one to choose his words eloquently. To be fair to Nate, he did not express his wish to fight either Francis Ngannou or Israel Adesanya.

He used both of them as examples to put his point across. He wanted to let the UFC know about what calibre of fighters he was looking to fight upon his return to the UFC.

But that did not stop the fans from taking Nate Diaz’s comments at face value. While some fans understood the meaning behind Nate’s comments, others proceeded to slander him for naming Francis and Israel as the only fighters who are good enough to fight him.

Some fans called him delusional while others wondered if he was intoxicated during the interview or not.

Here are some of the reactions to Nate’s comments.

🤣😂 dude lost his last fight and hasn’t fought since but doesn’t want one title shot but two title shots. Lmao. He must be smoking some good weed.

Can Nate cut down enough to fight Francis??

I guess he could beat Alex Pereira, @jiri_bjp, @USMAN84kg, @gloverteixeira, @JanBlachowicz, @KChimaev, @Rakhmonov1994 … I´m kidding, maybe he could beat a reporter but not any top 5 fighter at LW, MW, LHW o HW.

I just see his stock falling no matter who he faces🤷‍♂️ pic.twitter.com/XhBAzH2Yzl