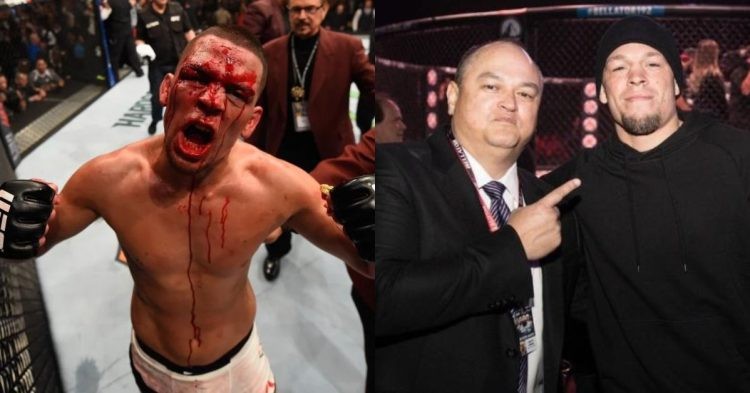 Nate Diaz has officially ended ties with the UFC following his big victory in his last fight over Tony Ferguson at UFC 279. However, there have been some speculations on what Nate might do next – with one rumor saying Nate will join Bellator MMA.

In a recent interview with the media, Bellator President Scott Coker claimed that they have reached out to Diaz for a potential contract. However, famous MMA journalist Ariel Helwani has pointed out that any news regarding Nate Diaz talking to other promoters or promotions is untrue and illegal.

As Diaz is still under a three-month negotiation period with the UFC, this forbids Nate to have any talk with other promotions. Taking to Twitter, Helwani wrote:

“A note on any story about a promoter/promotion talking to Nathan Diaz right now: don’t believe it. Not true. It’s actually illegal. Diaz is in an exclusive three-month negotiation period with the UFC. Meaning he can’t talk to anyone. And he hasn’t talked to anyone.”

A note on any story about a promoter/promotion talking to Nathan Diaz right now: don’t believe it. Not true. It’s actually illegal.

Diaz is in an exclusive three-month negotiation period with the UFC. Meaning he can’t talk to anyone. And he hasn’t talked to anyone.

Ariel clarified in a post that this is a standard policy in UFC, and after the period is over, UFC will have no stake in the situation and the athlete will then be finally free to do whatever they want to.

“This is standard procedure, btw. Every UFC deal has this baked in. So, unless they wave it, which they have in the past, there’s no talking to anyone out there. And they haven’t waived it.”

This statement from Helwani makes it pretty clear that Coker’s claims of reaching out to Nate was a false alarm and the Stockton slugger might just have a chance to appear in the octagon again.

What Does the Future of Nate Diaz Looks Like?

Following UFC 279, Nate Diaz left the UFC as his contract with the promotion came to an end. Now, several rumors about his future are circulating throughout the world of combat sports.

In his post-fight interview at UFC 279, Nate stated that he’d venture into other combat sports and after that, he might come back to the UFC for a title fight. Some rumors suggested that he will box Jake Paul in a big money fight.

Meanwhile, there were other speculations that he’ll face against Conor McGregor to complete their trilogy, one that fans have been long asking for since their last fight. But as the chances of that fight happening under the UFC seems slim to none, it would make sense for Nate to use his own platform, Real Fight Inc., to promote the fight. As per the report, Nate had applied for a promoter’s license to form a new promotion, Real Fight Inc., which is expected to feature MMA, boxing, and BJJ athletes.

Other than that, some rumors suggested that the Stockton slugger will step into the squared circle of WWE, as he is already a massive fan favorite. Recently, Diaz has called out Hollywood’s biggest superstar and former WWE athlete, Dwayne ‘The Rock’ Johnson regarding his issues with UFC shoes.

This might be a playful statement for the fans who are aware of the beef that Diaz had with ‘The Rock’. In that recent tweet, Nate wrote: “I’m only going to fight the rock, Otherwise I’m good.”

During the events of UFC 244, Nate was set to face Jorge Masvidal for the BMF belt, of the UFC. The alleged rivalry started since ‘The Rock’ presented Masvidal in that fight. The Stockton slugger thought Dwayne was in Jorge’s side and trash-talked a bit in the post-fight interview.

However, The Rock seemed to take no hurt about the whole ‘rivalry’ and stated that he expected Nate’s comments as Stockton’s finest is known for his hood persona. As of now, we can’t be too sure what will be next for Nate. But it is certain that if he decides to part ways from the UFC, there will be limitless opportunities available for him.