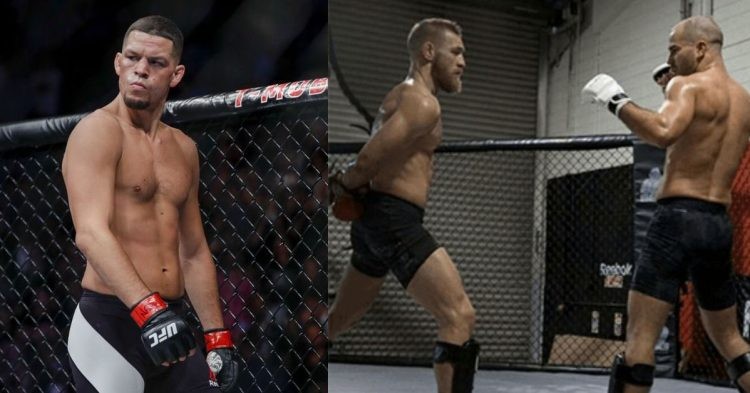 Conor McGregor has called out his former best friend and sparring partner Artem Lobov for a street fight following the Proper 12 lawsuit. Lobov believes that he deserves a 5% stake in the $600 million whiskey brand because he, allegedly, was the initial creator of the business.

Soon after Lobov revealed that he is taking the matter to the court, McGregor took to social media to go on a rant and is now looking to settle the score in a street fight. He posted a series of tweets and called Lobov “an uncooked sausage” before posting a voice note saying:

“You’ve got lawyers messaging me about defamation and all this suing. You’re a little blouse, mate. I’ll see you at SBG Concorde at 10 pm tonight and we’ll fight for the whole lot. Answer this call out, you little blouse!”

Interestingly, McGregor’s former rival and UFC legend Nate Diaz has also taken notice of the ongoing controversy. After McGregor’s call out to Lobov for a street fight, Diaz commented: “So is Artem gonna show up to the big fight or what?”

So is Artem gonna show up to the big fight or what?

Diaz is known for his involvement in street fights and backstage brawls. As a result, he would be interested to see how this goes. However, it is unclear if Lobov showed up for the challenge but he is very focused on taking this to the High Court.

Is Conor McGregor the only founder of Proper 12 whiskey?

According to Conor McGregor’s legal team, he is the creator and developer of Proper 12 whiskey and the brand is owned by Eire Born Spirits, a company co-founded by McGregor, his manager Audie Attar, and Ken Austin.

However, things became a little complicated after Artem Lobov came into the picture and claimed that he is the original creator and co-founder of the whiskey brand. Artem has a master’s degree in Finance and Capital Markets from DCU and as per him, this is why McGregor asked for his help in launching the whiskey brand.

Now after the brand is worth $600 million, Lobov believes that he deserves a 5% stake in the company which is worth $180 million. The whiskey was launched in 2018 and McGregor has been promoting it ever since. It became a huge success and a major reason that McGregor earned a fortune.

Meanwhile, Lobov stated that McGregor offered him $1 million for his part but he rejected it. He has issued a lawsuit against McGregor and we will see who the High Court will favor.