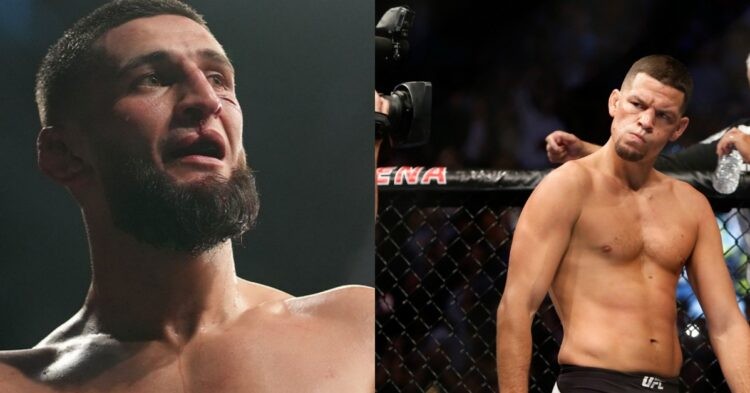 Khamzat Chimaev vs Nate Diaz in July? (Images via Twitter)

Nate Diaz and Khamzat Chimaev just had an interesting exchange of text messages on Twitter. It was leaked a few weeks ago that UFC was looking to book a fight between them. But the bout between Chimaev and Diaz ultimately did not summarize. Now Nate has confirmed that he was indeed in talks to fight The Borz, but the fight was not made due to Chimaev’s unavailability.

It is no secret that Nate wants to get out of the UFC. If rumours are to be believed, he only has 1 fight left in his current UFC contract. But there seems to be a lot of hesitancy from the UFC in booking a fight for Diaz.

Hence, when the news of his potentially fighting Chimaev leaked, it sent the fans into a frenzy. However, the excitement did not last very long as things went radio silent on the matter.

In a recent tweet, Nate revealed that he was very much into the idea of having Chimaev as his last UFC opponent. But all the obstacles came from the Chechen’s side. According to Nate, from being injured to having logistical issues, Khamzat Chimaev could not accept the fight. He also pleaded with the UFC to match him up with an opponent in July. He wrote,

I been tryin to fight for a year and months I also tried to fight kamzat for the last month and a half but he was hurt, had visa issues,overweight and now his bitchass is off getting married instead of fighting wtf ? I’m tryin to get a fight wit a real fighter asap/July
LFG

However, the statement did not go down well with Chimaev. He accused the 37-year-old of being intoxicated while sending out the tweet. Khamzat fired back by writing,

You are funny, are you high? It seems like you been smoking 🤣🤣🤣

Will Khamzat Chimaev vs Nate Diaz happen in July?

Khamzat’s last contest was just a month ago when he went up against Gilbert Burns at UFC 273. It was an absolute war which saw both fighters being pretty banged up. It was possible that when the UFC approached him with an offer to fight Nate, Chimaev was still in the process of healing.

As a result, he possibly could have turned down the bout in light of his injuries. But his rebuttable seems to suggest that Chimaev in fact did not refuse to fight Nate. Among all the drama, Stephen Thompson took the chance to throw his name into the mix as well.

Wonderboy is coming off an upsetting loss against Belal Muhammad on December 18th of last year. Once a prominent feature of the Top 5 of the welterweight division, Stephen has slid down to no. 7 in the division. Hence he needs a big fight to rejuvenate his career and there is no bigger fight available now other than Nate Diaz. Thompson tweeted,

Battle of the Ninja’s…you…me…July….let’s do it!!!! Again, who wouldn’t love a striking battle! #NinjaIsh 🥷 pic.twitter.com/TEQqtJcvo8

Khamzat seems to be destined for bigger things at this moment in his career. UFC president Dana White wanted him to face Colby Covington in his next fight. It remains to be seen whether that fight actually takes place or not. As for Nate, he is desperate to run down his contract.

Fighting Thompson may not be such a bad option for Nate. He will be free to pursue other interests as soon as the fight is done. On the other hand, it provides both the UFC and Wonderboy with a big fight. Hence, it will be a win-win situation for all the parties involved.