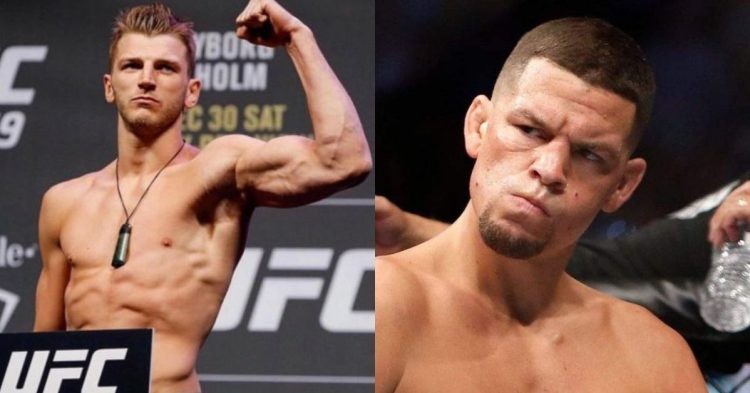 UFC fighter Nate Diaz had earlier stated that Dan Hooker is the #1 Welterweight fighter right now after posting an old KO clip where Hooker picked up a stoppage win over now #1 welterweight contender Gilbert Burns. In response to Israel Adesanya’s comment on the clip, the Stockton Slugger credited Adesanya’s teammate and training partner Dan Hooker for his emphatic win. In the past, both Gilbert Burns and Nate Diaz have had a brief back and forth on the social media.

After Diaz posted the KO clip, Gilbert Burns rained back at the younger Diaz brother by reminding him about his lackluster resume. Burns poked fun at Diaz’s UFC record and circled the 12 losses to claim his greatness.

Nate Diaz to take on Dan Hooker at a special weight class?

After the back and forth, Dan Hooker capitalised on the opportunity with a call-out. While many fight fans believe that Nate Diaz was taking a dig at Gilbert Burns while claiming Dan Hooker is the #1 contender, there’s a reason to believe that we have an exciting fight in the form of Dan Hooker vs Nate Diaz. The English fighter is coming off an impressive Fight of the Year outing against former interim champion Dustin Poirier. Hooker is currently the #4 lightweight contender, and teased a possibility of moving to welterweight to take on Nate Diaz and the Stockton Slugger has responded.

Nate Diaz sent out a tweet where he invited a special weight class to take on Dan Hooker, teasing a 165 division inside the UFC. Nate Diaz has previously competed at the lightweight division and was scheduled to face Dustin Poirier at the 155 division, before making his UFC return against Anthony Pettis at the welterweight division. Many fights fans believe that Diaz is a solid lightweight contender and lacks the physicality to be at the 170 pound division.

165 division is something that has often come out as an alternative to fighters missing weight. Additionally, there is a significant 15 pound difference in 155 to 185, with many welterweight contender able to cut at the 180 pounders able to make it to to the 170 pound division. It will be interesting to see what transpires, but with the BMF belt coming to reality, there’s a reason to believe that UFC President Dana White might grant Diaz’s wish to compete at the special 165 division after all.