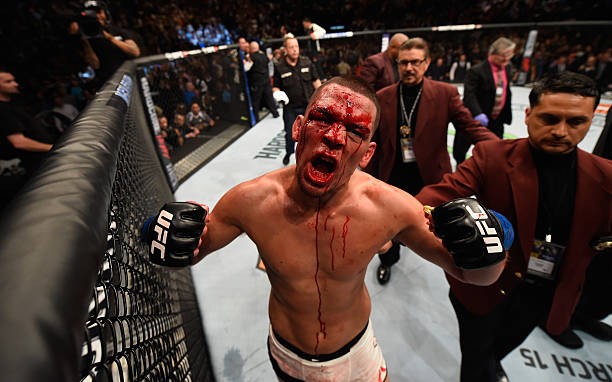 LAS VEGAS, NV - MARCH 05: Nate Diaz reacts to his victory over Conor McGregor of Ireland in their welterweight bout during the UFC 196 event inside MGM Grand Garden Arena on March 5, 2016 in Las Vegas, Nevada. (Photo by Josh Hedges/Zuffa LLC/Zuffa LLC via Getty Images)

Leon Edwards is going to fight the younger Diaz on the 6th of June at UFC 263. This is a comeback fight for the Stockon Slugger and given the following among the fans, it is no secret that fight fans will root for his victory. Nevertheless, Leon has some essential which can make sure that he comes out as the victor from the bout. Leon vs Nate is the first ever 5 round non-title co-main event.

Let’s dig into the past few years. Well, for starters it’s not easy to have an 8 fight win streak in any division – but, welterweight is one of the most competitive divisions and Leon has done that. Rocky doesn’t have a flashy fighting style, however, he is as technical as any of the best fighters out there.

Now, Nate is flashy and stylish probably best known for his boxing skills. On the other hand, Leon Edwards is very well-rounded. He’s a big welterweight, has good wrestling, great striking, generally fights smart and cautiously, and doesn’t get hit clean very much.

Undoubtedly Rocky will also have the advantage of being a youth. Now that doesn’t mean that Nate is old and won’t have that special striking. But, everyone saw what happened with McGregor in his fight with Dustin. When Conor came back from a break his sharpness was certainly missing.

Diaz’s last fight was in 2019. Nate lost to Masvidal via KO while Edward’s recent fight with Belal ended in a No Contest. Even if it was before 2 years it still would play an important psychological role towards their approach. certainly to which Leon will be in a better mental space.

Not to forget that Nate is fighting Rocky at UFC 263 because their fight was canceled/postponed due to Diaz’s injury. The former title challenger facing injury during his training camp. How bad is his injury? The answer to that is still ambiguous.

Even though favors are just tilting towards Rocky. It is silly to count The Stockton Slugger out of this game. If Leon has better techniques the, Nate has the advantage over the ground game. The former title challenger is a black belt in Brazilian jiu-jitsu. In conclusion,Whatever the outcome may be, fight fans will certainly get a treat to their eyes after watching Leon vs Nate.

Nate Diaz’s Walkout Songs: List of Songs Nate Diaz Has Walked Out to in His UFC Career