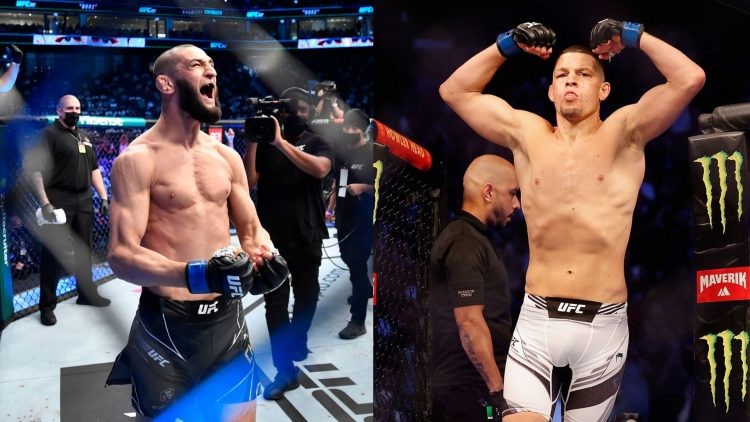 After a lot of drama, Nate Diaz is finally going to make his octagon return on September 10th of 2022. It’s the final fight in Diaz’s UFC contract but it will be one of the most difficult fights in his UFC career.

Nate Diaz takes on Khamzat Chimaev in the main event of UFC 279 as per recent report from ESPN. Nate Diaz has been calling out Khamzat Chimaev for a while now. And the Borz certainly accepted Diaz’s call outs on social media.

However, due to contract negotiation drama UFC was unable to book this fight until now. UFC Chief Business Officer, Hunter Campbell has confirmed that Diaz and Chimaev have verbally agreed for the 5 round main event at UFC 279.

Going into the fight it seems Diaz and Chimaev have an intense rivalry between them. After the fight was made official, Chimaev issued a statement through his representative, Majdi Shammas and stated: ” I am going to handle Nate Diaz’s funeral with the UFC”

Nate Diaz’s representative, Zach Rosenfield said “This is a fight Nate has been asking for since the middle of April”

Who should be the favorite to win Nate Diaz vs Khamzat Chimaev at UFC 279?

This is a terrible matchup for Nate Diaz. A fight against Dustin Poirier would have been a more favorable matchup for Diaz, who only one has fight left in his UFC contract.

But, here we are speculating how would Nate Diaz do against Khamzat Chimaev, who is coming off a win against Gilbert Burns.

The fight against Gilbert Burns answered a lot of questions surrounding Khamzat Chimaev. We got to know that even if he is one of the best welterweights in the world right now he is not invincible. Also his inexperience and lack of composure almost cost him the fight against Burns.

However, it’s very likely that Chimaev would outwrestle all the top UFC welterweights except the liks of Kamaru Usman and Colby Covington. And he can certainly outwrestle Nate Diaz, whose takedown defense has not been that impressive against great wrestlers.


Nate Diaz’s grappling is unlikelyto be a huge threat to Khamzat Chimaev. It won’t be surprising if Chimaev inflicts a lot of damage to Diaz if the fight goes to ground.

Diaz will have success with his boxing against Chimaev. But, he does not have the power tlike Gilbert Burns to force Chimaev to slow down and knock him out. Besides that, Burns had a lot of success against Chimaev with his leg kicks. But, Diaz does not throw a lot of leg kicks.

Khamzat Chimaev should be a huge favorite to win the fight against Nate Diaz. But as always, Diaz will have a lot of support when he enters the T-Mobile Arena to fight Chimaev.