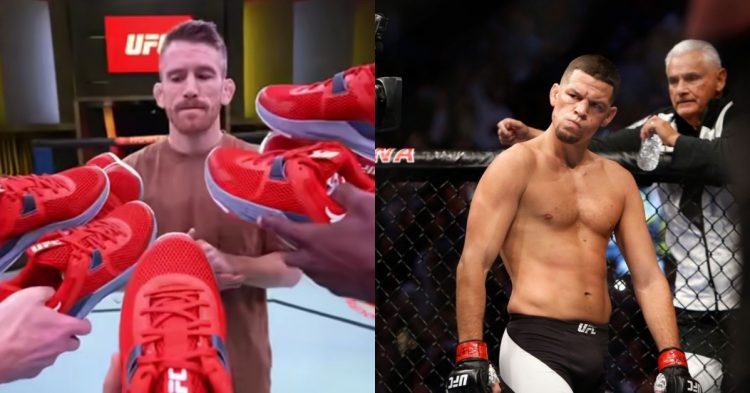 Nate Diaz may not be a part of the UFC any longer, but his essence is still pretty much a big selling point for them. The company recently used one of his most iconic lines to promote the brand ‘Project Rock.’ However, by the looks of it, Nate himself is not a big admirer of the shoes made by Dwayne Johnson’s company.

Cory Sandhagen will fight Song Yadong in the main event of this weekend’s UFC Vegas 60. Ahead of the bout, UFC used Cory to promote this Saturday’s fight as well as the shoes made by The Rock’s company ‘Project Rock.’ The promotion inked a deal with the brand to be its official footwear partner.

So, to spread the word about the commodity, UFC made Sandhagen utter some words which were made famous by Nate Diaz.

“I think I’m gonna hit him with some good s**t, not get hit, go home with a pocket full of cash.”

Although The Rock’s association is a big positive for the UFC, there have been some major controversies surrounding the deal. In a recent report, it was speculated that the fighters are not receiving any revenue from the deal between the UFC and Project Rock. A recent tweet from Terrance McKinney basically confirms the report.

Hey brotha @TheRock if you’re a fan of what we do make the deal favorable for the ones modeling your shoe I get it’s not your fault or your business doin it to us but show us the love you think you are. Get in our corner and support us 🙏🏾

T-Wrecks tagged The Rock in the tweet and addressed him directly. He pleaded that the fighters should also make a certain amount of money when they’re forced to promote the shoes.

Although fighters like Colby Covington, Jorge Masvidal and Francis Ngannou had nothing but good things to say about the product, Nate Diaz did not share the same sentiments. After beating Tony Ferguson in the main event of UFC 279, he bashed the brand ‘Project Rock’ and its shoes. During a backstage interview, he made some nasty comments about the shoes.

Hence, using Nate’s quote to promote the brand that he publicly buried, seems like an underhanded dig at the 37-year-old. Underneath the promotional video on UFC’s Instagram account, the fans speculated what Nate’s reaction to this advertisement may have been! One fan thinks the timing of the advertisement was not appropriate.

@zae_mma wrote, “Poor advertisement placement.” Another user by the name of @dhg.luis wrote, “Y’all bold as hell after what Nate said about them.” @pacbrady quoted Nate Diaz himself and wrote, “‘These shoes suck.- Nate Diaz.” @mmalocksonly wrote, “Nate not gonna like this”. Finally, @tylerfcknalton wrote, “Nate already turned down the contract didn’t he”.

So it is not good press for either the UFC or Dwayne Johnson. The Rock always maintains a good public persona. Hence, it remains to be seen what his reaction will be once he comes to know of all the outrage from the fans.