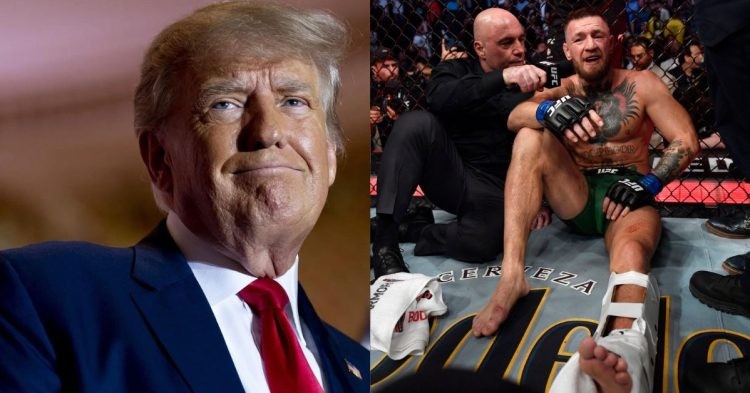 Recently a footage emerged showing Donald Trump’s reacting to Conor McGregor breaking his leg against Dustin Poirier last year. The former US President’s reaction has left a lot of fans in shock. Amidst the chaos, Donald Trump was completely unfazed by the happenings around him, and in the octagon.

You know Trump has seen some shit when he’s just completely unfazed by Conor McGregor snapping his leg vs. Poirier pic.twitter.com/7gmqfnCAgx

Conor McGregor suffered his first knockout loss in the rematch against Dustin Poirier. And that led to McGregor dropping his briefly adopted ‘nice guy’ persona to go back to the trash talker he is known as.

The talking didn’t help him in the octagon however, as he lost by TKO as he broke his leg at the ankle in the very first round of the third fight. Although the fight was going decisively in Poirier’s favor, the ending was indeed unexpected.

Amongst the celebrities in the UFC 264 crowd was a man well known to the people of the US. Long time fight fan, and former US President Donald Trump was in the audience for the trilogy fight between McGregor and Poirier. However, Trump’s relationship with UFC goes way back.

Back in the late 80s and early 90s, Trump was known for hosting various boxing matches in his ‘Trump Plaza’ Hotel and casino. Not only that, Donald Trump was once the financial manager of ‘Iron’ Mike Tyson. So, it is obvious that Trump has been involved in the hurt business for a long time. It would be safe to assume from his constant sightings at UFC events that he is indeed an MMA fan.

Not only that, UFC President Dana White has openly claimed to be a big time Trump supporter. He stated in an interview that Trump supported him multiple times when he needed help. He even went as far as saying that he is loyal to people like Trump, as they’ve been there for him in time of need.

When is Conor McGregor Fighting Next?

Since the leg-break, McGregor has not entered the octagon. The former champion got a titanium plate installed in the affected area. This even became the subject of a lot of memes. There has been no official announcement regarding his return, and we don’t know if he will even return again.

Conor McGregor has been acting in a movie alongside Jake Gyllenhaal, which have pushed any plans of his return even further. Despite receiving various callouts from names like Michael Chandler, no announcements have been made. McGregor has shown interest in a potential Chandler fight. Chandler has also called him out multiple times. It would be fair to say that he is actively pursuing a fight with McGregor.

McGregor has been active on his muscle gains on social media. Dana White has stated that he will have to be in the USADA testing pool for 6 months to compete again as a clean fighter in the eyes of USADA. We look forward to his return as he brings excitement to the lightweight division.