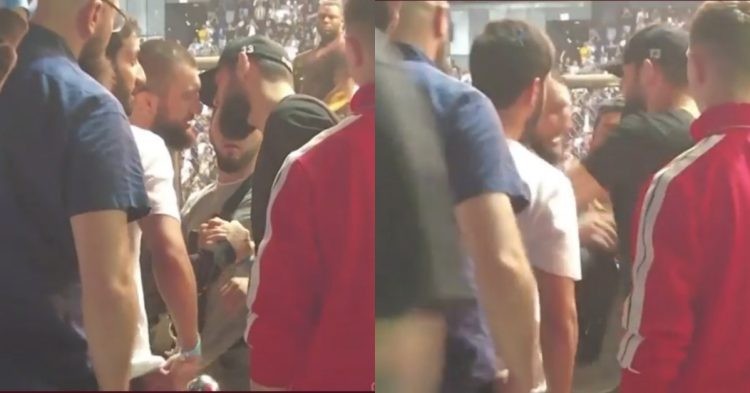 As fans may know by now, Khamzat Chimaev was involved in a brawl after UFC 280. In some videos, Khamzat was seen talking with Khabib Nurmagomedov‘s cousin, Abubakar Nurmagomedov. They were talking to each other while holding hands. But things became heated all of a sudden as Chimaev pushed Abubakar. Before they had the chance to throw punches, security separated them.

But what really happened? Why did Chimaev push Abu during their exchange? A recently released video clarifies it all. As he was passing Nurmagomedov, Khamzat punched him in the stomach playfully. However, Abu did not take it as a joke, as he told The Borz to not do the same again. But Chimaev is a prideful man and he replied, “I can do whatever I want!”

Abubakar, who defeated Gadzhi Omargadzhiev earlier in the night, insisted that Khamzat should not repeat it again. It ticked off the UFC superstar and he proceeded to put his hands on Abu. For fans who were wondering what the origin of the scuffle was, they now have their answer. Although it got physical, the reasoning behind the brawl does not seem too serious.

Khamzat Chimaev apologized for the brawl at UFC 280

In the initially released footage of the incident, fans spotted Khabib Nurmagomedov in the background. He was inside the Octagon after Islam’s win over Charles Oliveira at UFC 280. Like the fans in attendance, Khabib was also clueless about what was going on initially. But later in the night, Khamzat Chimaev and Abubakar Nurmagomedov patched up.

Ramzan Kadyrov, who is a close associate of both Khabib and Khamzat, stepped in to resolve the quarrel. In a leaked screenshot of a video call with Ramzan, Khamzat and Abu were standing side by side and seemed to be on friendly terms. As evident by some pictures from the night, Khamzat also had dinner with Team Khabib to celebrate Makhachev’s championship win.

Afterwards, The Eagle gathered all the fighters and addressed the incident in a video. In the video, Khabib apologized to the fans for all the drama. He also called for peace amongst the fighters and wished Chimaev to be the next Russian fighter to win the UFC belt. The respect for Khabib was evident in the video, as all of them listened to what Khabib had to say, without any interruptions.

So what is next for Khamzat Chimaev? UFC President Dana White wants Khamzat vs Colby Covington next. However, as of now, it is not clear when the fight may take place. A win over Colby will definitely make him the next contender for the 170lbs belt.

The current champ Leon Edwards will face Kamaru Usman in the rematch of their UFC 278 fight. If Khamzat gets past Covington, he will fight the winner of the trilogy bout between Edwards and Usman.