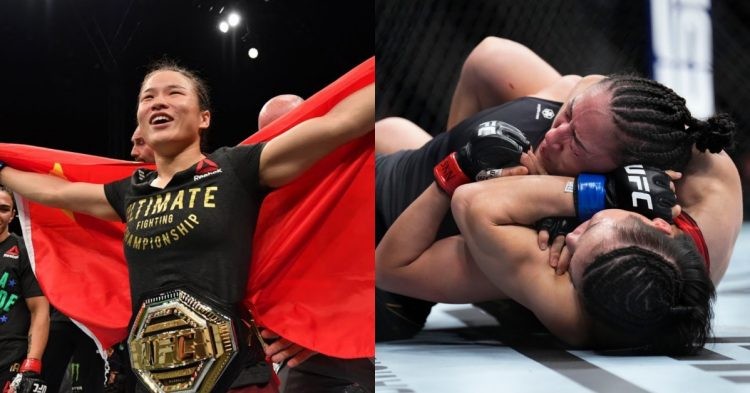 Former UFC strawweight champ Zhang Weili had another chance to regain her title inside the iconic Madison Square Arena. However, the current Carla Esparza beat Rose Namajunas in her last bout to win the title. Rose had two wins over Weili and for Carla to beat her, was a big deal. Hence, the bout had the fans’ interest as they were excited to see two elite 115lbs fighters battle it out for the belt.

Weili did not make the same mistake that Rose did against Carla Esparza. Rose was too hesitant in going after Esparza. However, Zhang went to work on Carla immediately and pushed her toward the fence. But Carla managed to grab a hold of Zhang’s leg and put the bout on the ground. However, Weili’s grappling and physicality were too much for Esparza to handle.

GIVE HER THE BELT BACK 🏆@MMAWeili recaptures gold at #UFC281!! pic.twitter.com/su4ioC7DIP

The Chinese fighter almost finished Carla in the first round with submission. However, the Cookie Monster managed to survive round 1. But, ultimately Magnum was too good for Carla and got the submission at the 1:05 minute mark of the second round. Zhang Weili now becomes a two-time UFC Strawweight Champion with the win. The first Chinese fighter do so!

It was a showcase of pure dominance on Zhang Weili’s behalf at UFC 281. She looked focused right from the start and was hell-bent on regaining her title. Zhang knew that Carla Esparza was a big threat on the ground. But Weili had a point to prove and she defeated Carla at her own game. There were some question marks on her grappling after her last defeat against Rose Namajunas. However, she shut up all the critics with the performance.

A dream come true for @MMAWeili to recapture her strawweight crown 👑 #UFC281 pic.twitter.com/uuLbDF4OeQ

Following the bout, Weili was overwhelmed with emotions as she expressed her feelings about the win at MSG. “I comeback, oh my god! Now I feel like dream you know. Every day I dream this, my belt, comeback!”

Coming into this fight, Zhang Weili was a massive fan favorite. Throughout the fight week, Fans cheered at the top of their lungs for Weili and she did not disappoint. Zhang showed exactly why the fans adore her as she put on a masterclass against an elite fighter like Carla Esparza. From her elite striking to grappling, everything was on point. Fans congratulated the fighter on Twitter on becoming the champ once more.

First Ever Chinese UFC Champ is now the 2x champion!!!!

And New! And a true fighter! Always looking for the finish on the feet and on the ground! Always improving too! #UFC281

What are your thoughts on Zhang Weili becoming the champion once more at UFC 281? Let us know in the comments down below.